September 11 attacks on the World Trade Center in New York City remain one of the most horrifying acts of terrorism in American history. About 3,000 people died on that devastating day in 2001, and 6,000 were injured. These numbers do not include people who are still dying today from effects of the attacks. Toxic dust from the planes and buildings has contributed to a staggering number of cases of cancer, respiratory disease, and now according to recent studies, cardiovascular disease.

The World Trade Center (WTC) buildings were coated with perfluoroalkyl substances (PFAS) that were present in the toxic dust created by the attacks. The purpose of the PFAS was to make the buildings stain-resistant and waterproof. After the planes crashed into the WTC buildings, PFAS were released into the air and inhaled by numerous people. Researchers like Dr. Lung-Chi Chen of NYU have investigated the long-term effects of toxicant exposure. Dr. Chen and his colleagues recorded the blood concentration of PFAS in approximately 50,000 victims. Then, using data from other studies and NYC health registries, Dr. Chen determined the number of heart disease hospitalizations that occurred from September 11, 2001 to the present.

According to Dr. Chen, evidence exists that increased levels of PFAS are associated with increased blood lipid (fat) concentration. A high blood lipid concentration is a major risk factor for cardiovascular disease, as the lipids clog the blood vessels and prevent blood flow. Since blood vessels bring blood back and forth from the heart to the rest of the body, compromised blood flow is a serious problem that often ends in death. 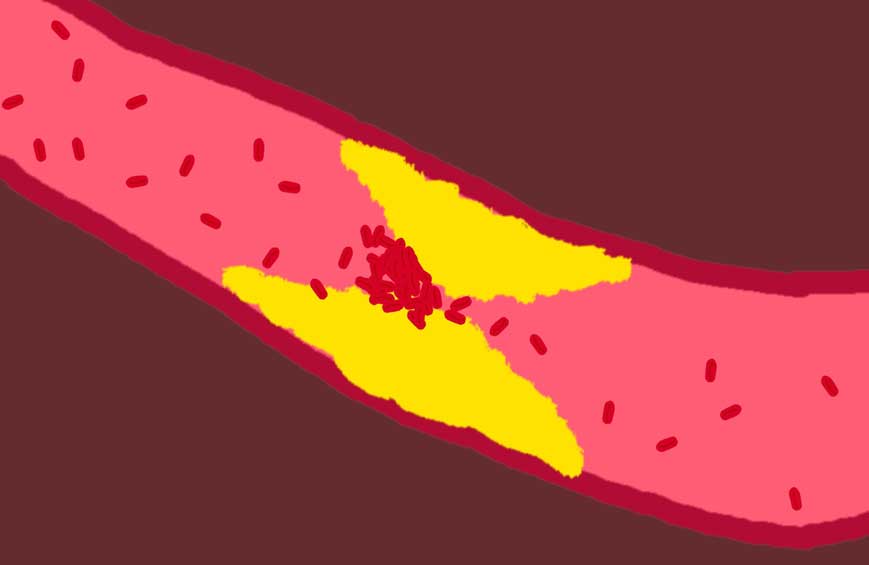 However, it’s not yet known exactly how PFAS contribute to higher blood lipid concentration. One hypothesis is that PFAS may cause inflammation in the liver and prevent the liver from properly carrying out metabolism, the chemical processes that occur to maintain life. As a result, more lipids are left in the blood vessels than usual, increasing the risk of heart disease.

Another way the 9/11 attacks may have increased risk of heart disease was by inducing cases of Post-Traumatic Stress Disorder (PTSD), a mental health problem that some people develop after traumatic events that causes symptoms like depression, anxiety, withdrawal, or reckless behavior. It is also known to have many negative impacts on health, one being a dysfunctional renin-angiotensin system, the hormone system that controls blood pressure. When bodily controls for blood pressure start to go haywire, the risk of getting heart disease skyrockets.

Dr. Alfredo Morabia, along with other researchers at Columbia University, completed a study using data on 46,000 rescue/recovery workers, commuters, and residents of Lower Manhattan. Researchers counted the most cardiovascular disease hospitalizations for people categorized as having high exposure to the attacks, which was based on proximity and self-reporting of PTSD symptoms. Through overstimulation of the nervous system, PTSD prompted increased blood pressure and contributed to higher risk of heart attacks and stroke.

One limiting factor of the PFAS and PTSD studies is the time it takes for heart disease symptoms to appear. Thus, we are only scratching the surface of 9/11-related cardiovascular disease cases. The September 11 attacks will be remembered as one of the most abominable hate crimes in US history with untold damage continuing to be revealed for decades to come.

Dr. Lung-Chi Chen is a professor in the Department of Environmental Medicine at New York University (NYU). Since receiving his Ph.D. from NYU, Chen has authored over 120 research papers in the past four decades. He is internationally recognized as an inhalation toxicology expert and his research seeks to understand the effects of environmental toxicants on people’s health.

Dr. Alfredo Morabia is a professor in the Department of Epidemiology at the Mailman School of Public Health at Columbia University, and at the Barry Commoner Center for Health and the Environment at Queens College, CUNY. The author of numerous books, his scientific research primarily involves urban health and history.

This article was written by AJ Fezza. As always, before leaving a response to this article please view our Rules of Conduct. Thanks! -cSw Editorial Staff