Lessons from Salamanders: Could Humans Ever Regenerate Limbs?

Home » Animals » Lessons from Salamanders: Could Humans Ever Regenerate Limbs?

Imagine having to undergo an arm amputation due to a severe trauma or infection. Sure, you could wear a prosthetic to perform some daily functions, but you could never get the arm back. Or could you?

A number of animals have the ability to regenerate parts of their bodies during early development. For instance, planarians, a type of flatworm, can grow back their entire bodies from small pieces of tissue. Even humans can regenerate the tips of their fingers and toes as children. However, salamanders are the only vertebrates that can replace complex body parts lost at any age.

The first step to understanding the regeneration process is to identify the genes involved. The problem is that the salamander genome is 10 times the size of the human genome and filled with repetitive DNA, making it incredibly difficult to sequence. Recently, however, scientists used new techniques to do just that, making the salamander genome the largest to be fully sequenced to date.

Dr. Jessica Whited is an Assistant Professor of Stem Cell and Regenerative Biology at Harvard University studying salamander genes and regeneration. When asked about her research, she said “sometimes the small things turn out to be big clues.”

This was demonstrated by her discovery showing some of the genes that are highly expressed during regeneration are actually dispensable. It’s possible that redundancy is built into the system, which speaks to its complex nature.

In order to understand the causes behind regeneration, the process itself must first be defined. The three major components of regeneration are as follows:

1. Epidermal cells, which are cells from the outer layer of the skin, grow over the wound to seal it off. This creates a wound epidermis.

2. Cells are activated to grow and divide and a blastema (i.e., a group of rapidly dividing, undifferentiated cells) forms just under the epidermis.

3. Cells within the blastema develop specific functions, tissues are patterned and growth continues, eventually forming a replica of the original limb.

It is unknown exactly how the cells in the salamander’s blastema form or where they come from. However, scientists have two hypotheses. The first is that these cells are created when unspecialized stem cells in tissues divide. The second is that they come from already specialized cells, like bone cells, that dedifferentiate (i.e., go back into a more immature state) and then divide.

Dr. Karen Echeverri, an associate scientist at The Eugene Bell Center for Regenerative Biology and Tissue Engineering at the Marine Biological Laboratory in Massachusetts, is also studying tissue regeneration in salamanders. She focuses on the differences between the ways in which humans and salamanders react to skin and spinal cord injuries.

Dr. Echeverri has found that, when a salamander suffers an injury that fully punctures the skin, a blood clot forms and a wound epithelium (a type of wound epidermis) grows over the wound. Underneath the epidermis, a blastema-like structure forms. Here, collagen is laid down in parallel bundles. It is then remodeled into a basket weave pattern, which is how the skin originally forms. This enables the other layers of the skin to regenerate and allows the blood vessels and nerves to grow back into the area, restoring full structure and function to the skin.

This is similar to how, when a building is being constructed, the foundation (like the blood clot and blastema-like structure) must be laid first. After this, the building’s framework (like the collagen) is built around or on top of the foundation. More materials are placed over time until the structure is complete and electrical wires and plumbing (like nerves and veins) are added to make the building function properly.

However, in humans, once a blood clot forms, the outer layer of the skin migrates under it, preventing a wound epithelium and blastema from forming. Therefore, when collagen is laid down in parallel bundles, it is not remodeled. This results in the formation of scar tissue, which has up to only 70% of the elasticity and tensile strength of the original skin. This would be like rebuilding a damaged home on a weak foundation. 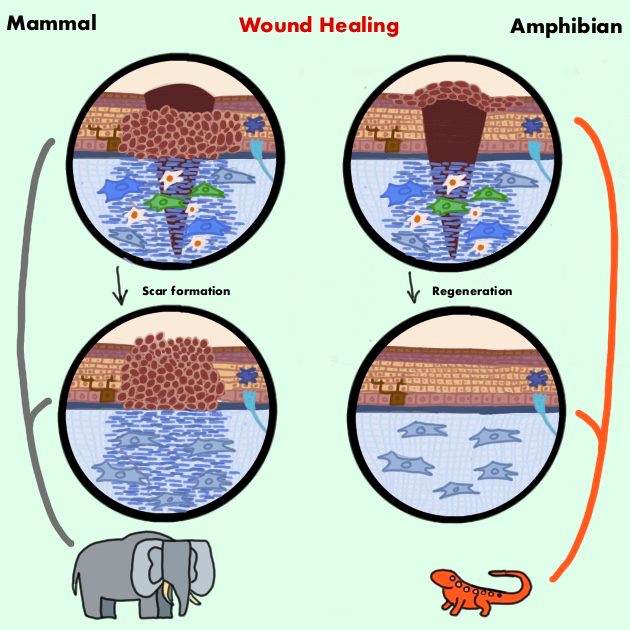 In regard to spinal cord injuries, Dr. Echeverri has found that, in salamanders, two proteins bind to one another. Together, they drive cells down the path of regeneration.

In humans, one of these proteins also forms in response to a spinal cord injury, but it chooses a different partner. Instead of leading to regeneration, this protein complex causes cells to migrate to the injury site and form a glial scar (i.e., a scar in the nervous system). This prevents additional injuries from occurring in the central nervous system. However, it also activates reactive gliosis, a process in which cells produce proteins that prevent neurons from regrowing. This is similar to how sunblock prevents harmful radiation from reaching a person’s skin but also limits Vitamin D absorption, which is beneficial for certain bodily functions.

Interestingly enough, both salamanders and humans have the genes for all three of these proteins, although it is unclear why they pair up differently. Therefore, it is possible scientists may be able to one day promote spinal cord regeneration in humans and other mammals.

Another surprising finding is that salamander limbs fail to regenerate after repeated amputations. In these cases, much like in humans, scar tissue can be found near the amputation site. As researcher Dr. Whited puts it, “Even awesome regenerators can be broken.”

Although it is unclear why this happens, Dr. Whited has several theories. For one, the regenerative process may require a certain “recharging period” before it can work properly again. Alternatively, cells may have an inherent defect that allows them to undergo regeneration only a finite number of times or some individuals may be genetically programmed to regenerate better than others.

Ultimately, the goal of this research is to understand the various pathways behind salamander regeneration so the knowledge can be used as blueprints for human limb regeneration.

Dr. Echeverri notes it is difficult to speculate about whether human regeneration is possible, asking, “Is this something that we have actually selected against in evolution because maybe it is a far too energy-dependent process?” However, she does think there will be some progress within the next 20 years on scar-free skin wound healing, muscle repair, and potentially cartilage repair.

On the other hand, Dr. Whited believes that, although full human limb regeneration is unlikely to occur within our lifetimes, “it is not a matter of if, but when.” For example, she theorizes that a person’s wound can be covered with skin or thin dressing similar to a wound epidermis. The person may be given medicine to prevent infection, and factors, such as proteins, that activate cells to form a blastema can be injected into the area. Dr. Whited hopes that, using this or another approach, humans may one day regenerate full limbs.

Still, both scientists acknowledge the time it takes to grow a limb may be an issue. Dr. Echeverri points out the animals that regenerate are tiny compared to humans. Salamanders, for instance, are up to 100 times smaller than humans, and they can take almost 6 months to regenerate a full limb. Therefore, Dr. Whited notes it may take over 20 years to regrow a full human limb. However, even if this is the case, an underdeveloped limb can still be incredibly useful, especially compared to a prosthetic or no limb at all.

Other possible issues could include tumor formation (i.e., if a therapy causes too many cells to dedifferentiate and/or divide in the blastema) and the fact that limbs will have to be functionally integrated into the brain in order to restore function.

Despite these significant challenges, researchers hope humans will one day have some capacity for regeneration, whether this be just scar-free wound healing or full limb regeneration.

Dr. Karen Echeverri is an associate scientist at The Eugene Bell Center for Regenerative Biology and Tissue Engineering at the Marine Biological Laboratory in Massachusetts. She received her Bachelor of Science Honours in Biochemistry from the University of Galway in Ireland and her Ph.D. in Zoology from Trinity College in Ireland. Dr. Echeverri’s lab currently has three main areas of research: the salamander’s ability to regenerate a fully functional spinal cord after injury, scar-free wound healing and the evolution of regenerative ability.

Dr. Jessica Whited is an assistant professor of Stem Cell and Regenerative Biology at Harvard University. She received her Bachelor of Arts in Philosophy and Bachelor of Science in Biological Sciences from the University of Missouri and her Ph.D. in Biology from the Massachusetts Institute of Technology. Dr. Whited’s lab currently focuses on developing tools to manipulate gene expression during limb regeneration and exploring signals following injury that initiate the regenerative process. Her ultimate goal is to understand the process of natural limb regeneration at a cellular and molecular level so that this information can inform and inspire future therapeutic approaches aimed at provoking limb regeneration in humans.

Timmer, John. “A salamander with a genome 10 times the size of ours regrows lost limbs.” 17 January 2018. https://arstechnica.com/science/2018/01/a-salamander-with-a-genome-10-times-the-size-of-ours-regrows-lost-limbs/.

This article was written by Spencer Lyudovyk. Spencer and the cSw student editing team would like to thank Todd Bentsen for serving as a mentor on this story.Todd Bentsen has held communications leadership positions at several health and science organizations – most recently the Federation of American Societies for Experimental Biology – and Georgetown University Medical Center, Society for Neuroscience, and American Society for Clinical Oncology. As always, before leaving a response to this article please view our Rules of Conduct. Thanks! -cSw Editorial Staff

Spencer Lyudovyk is a sophomore at High Technology High School in New Jersey.