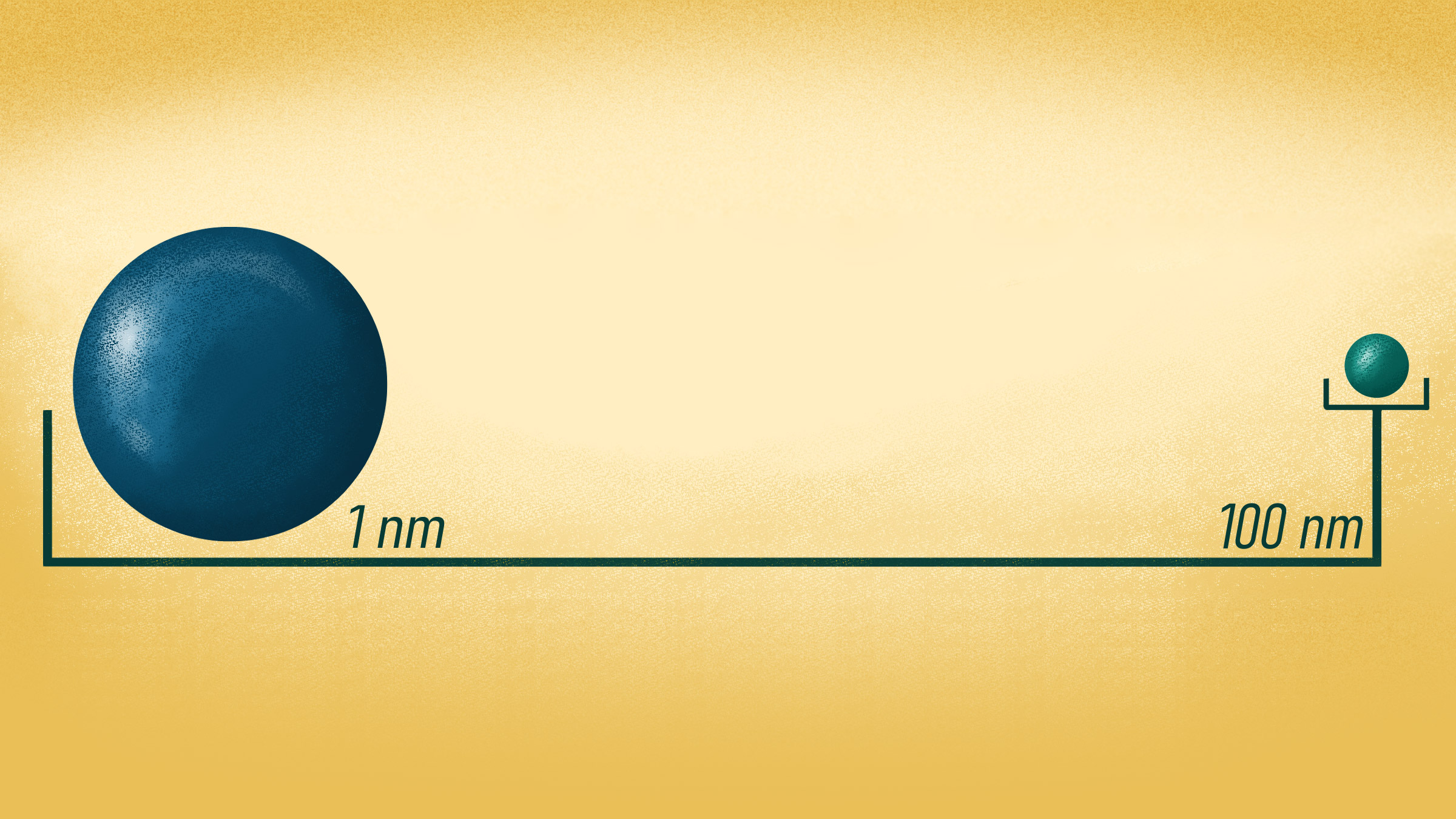 Small things can have large impacts. One prime example is the nanoparticle, an ultra fine particle of matter about 500 times thinner than a strand of human hair.

Nanoparticles can be very diverse in their makeup and function. They can be used in the manufacture of scratch-proof eyeglasses, crack-resistant paints, anti-graffiti coatings for walls, transparent sunscreens, stain-repellent fabrics, self-cleaning windows and ceramic coatings for solar cells.

But these are just a few of their many benefits.

Nanoparticles can also be manipulated to perform certain critical tasks, such as delivering drugs to specific regions of the body in order to fight disease. To deliver medications, these custom-designed nanoparticles, called nanodevices, are specially-engineered to transport the specific drug. Part of this design process instructs nanoparticles where to deliver these therapeutic agents. It also controls their release.

As one might expect, creating these fascinating technologies is not easy. “One of the challenges in the body is how do you go inside. It’s sealed from the outside, but inside the body is a universe of its own,” explains David Gracias, Ph.D., the Director of Graduate Studies in the Department of Chemical and Biomolecular Engineering at Johns Hopkins University. “If you shrink yourself so that you are a micro nanostructure, it would be like a universe for you.”

“It’s sealed from the outside, but inside the body is a universe of its own.”

Dr. Gracias and his team are working to create devices that will help the particles navigate their way around the body’s internal universe. This can be accomplished by using several methods. For example, a drug can be linked to a nanodevice via chemical bonding or physical absorption. Once the drug is released in the targeted area, biological stimuli, such as pH levels, temperature, or light activation allow for a controlled release of the drug.

“We also [need to] think about the practical concerns, for example, at small size scales,” continues Dr. Gracias.“Because the surface area [of the nanoparticle] is so large compared to the volume, things become very sticky. You have very high friction and so even a simple thing like if you move to a small particle in water, it’s like a big particle moving in honey.”

Even blood flow, which may seem like a weak force, has a powerful effect on tiny nanoparticles, making it increasingly difficult for them to move once they are able to enter the body. It’s similar to low tide at the beach. For most people, waves simply wash over our feet. However, the force is much more significant on small items, like particles of sand. From that perspective, low tide seems like a flood.

Dr. Gracias and his team use several methods to create devices equipped to navigate these challenges. “There are two classes of devices,” he says. “One [is] for outside the body, like a dye lab on a chip.” The chip detects molecules of a specific substance in a sample, and the dye on the chip tags them. “For the inside of the body, we could make more complicated robots that could go inside and perform different tasks.”

To decide what qualities the robot should be outfitted with to navigate the hazardous terrain that is the inside of a human body, Dr. Gracias and his team have broken up the body into three separate regions: the gastrointestinal system, the brain and the cardiovascular system. Each region is unique and therefore different modes of transportation are available. For example, in the cardiovascular system, red blood cells might be used as a vessel. “These cells can go way down to the capillaries, so [the devices] are typically five to eight microns in diameter,” Dr. Gracias explains.

In order to view samples outside the body, the researchers use electron microscopy. This allows them to see down to an atom’s scale. For a better view of function inside the body, magnetic resonance imaging (MRI) or ultrasound is used.

Over the last ten years, Dr. Gracias has been working on nanodevices called “microgrippers”. This technology can go into the body, access narrow pathways and collect specific types of cells in a very short period of time. Dr. Gracias hopes microgrippers and other nanodevices will soon enable earlier detection of cancer and transform healthcare in other ways. These star-shaped tools are activated by body heat, which causes their tiny “fingers’’ to close on clusters of cells. Microgrippers also contain a magnetic material, so they can be retrieved through an existing body opening. This breakthrough technology was originally tested in pigs by collecting cells from the esophagus and colon. Dr. Gracias explains, “Every model is based on the anatomical similarity to humans. We do a lot of work in the gastrointestinal tract as the tracts are similar in both humans and pigs.” Scientists have recently finished testing microgrippers in animals and they are currently being considered for use in humans.

Nanoparticles are being wielded by scientists like Dr. Gracias to discover, navigate and manipulate the minuscule universe within the human body. These tiny particles may one day give us the cure to cancer and other deadly diseases. They offer the benefit of a very targeted release of drugs, causing minimal side effects. Furthermore, nanoparticles can be programmed to attack harmful cell growth while ignoring beneficial and necessary cells. Nanoparticles and nanodevices are small, yet mighty, demonstrating that even something microscopic can have a large impact on life.

David Gracias is a Professor of Chemical and Biomolecular engineering and the Director of Graduate Studies for the Department of Chemical and Biomolecular Engineering at Johns Hopkins University. He received a Ph.D. in Physical Chemistry from the University of California at Berkeley. Dr. Gracias is known for designing and developing miniaturized devices. He has made revolutionary contributions to biomedical engineering to apply the capabilities of nanotechnology to modern medicine.

Maryam Khan is a senior at Robbinsville High School in New Jersey. Maryam is passionate about medicine and learning about new types of research.