STORY UPDATE: In 2020, CRISPR pioneers Jennifer Doudna and Emmanuelle Charpentier were awarded the Nobel Prize in Chemistry for pioneering the CRISPR technology.

A typical Swiss Army knife contains over ten tools with a variety of purposes. There’s a knife for slicing, a screwdriver for tightening or loosening screws, scissors for cutting and many more. When used carefully, each one of these instruments can be extremely helpful. Yet, with one careless move, you can get hurt. Scientists may one day say the same thing about CRISPR/Cas9, the multifaceted gene editing technology.

Over the years, scientists have been using various tools to change the genetic code of organisms in order to study the real life impacts in cells, tissues and whole animals. These techniques help scientists figure out the exact function of a particular gene. They also allow for the study of scientific process in detail. These tools are referred to as gene editing techniques.

To understand these techniques better, let’s take a scenario where the scientist wants to study what happens when hypothetical gene “X” is absent from mice. The best way to study this problem would be to remove gene “X” from an otherwise healthy mouse and observe the results. But to do this, scientists need a sophisticated tool that will only take out one gene without changing anything else from the mouse’s DNA code. Prior to the advent of CRISPR/Cas9, tools were available to achieve this goal. But they were less efficient, less accurate, challenging, and, not to mention, expensive. That’s why the discovery of CRISPR/Cas9 became a monumental advancement of global importance. It has changed the landscape of scientific research. In fact, some might go so far as to argue it’s one of the most influential scientific discoveries of the 21st century.

But what exactly is CRISPR/Cas9?

CRISPR is an abbreviation that stands for “clustered regularly interspaced short palindromic repeats.” These repeats are short sequences of double stranded DNA left behind after ancient viruses infected the bacteria. They’ve been naturally present in bacterial genomes for millions of years. Bacteria would use these arrays to document and remember viruses and eventually defend against these invaders if they come back later. After studying these repeats in bacteria for decades, scientists had the idea to use a similar approach in other animals and plants.

Cas9, an enzyme, is like a precise molecular scissor. And CRISPR is similar to a marker that instructs Cas9 where to cut the DNA. Once a cut is made, the cell repairs the DNA using natural repair machinery. Through these two processes, scientists are able to either add, delete or edit the existing DNA code. 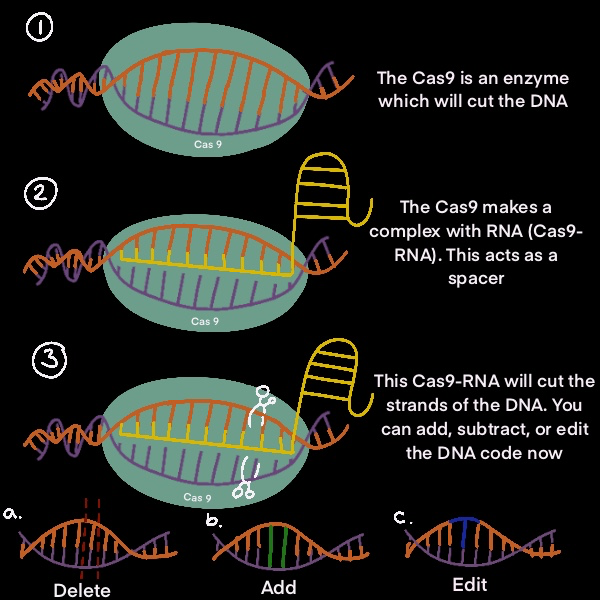 So does it work?

In 1987, CRISPR sequences were found in E.coli. However, it was not until 2007-08 that scientists paved the way for CRISPR/Cas9 gene editing experiments in a variety of animals, microorganisms, plants and even in human embryos.

While CRISPR/Cas9 has only been around for a couple of years, it has cut its way through science. One area where CRISPR has been revolutionary is within the agricultural sector. It has helped generate disease-resistant plants and increased the number of healthier fruits. For example, citrus canker disease affects lime and orange trees by creating lesions on fruit, leaves and stems. These lesions result in bacterial infections, meaning the fruit cannot be sold to consumers. To solve this problem, agricultural scientists in China successfully used CRISPR/Cas9 to create canker-resistant citrus plants. This allowed for healthier fruit for farmers to sell.

CRISPR/Cas9 technology is being applied to insects too. For example, malaria is a parasitic infection where the parasite is introduced into humans through mosquito bites. Malaria can be life threatening. In 2018, there were 228 million cases worldwide. Scientists are trying to use CRISPR/Cas9 to genetically modify mosquitoes so they won’t be able to spread malaria. If successful, the move will lower the number of infections tremendously and may become a cost effective approach to contain malaria worldwide.

CRISPR/Cas9 has had a lot of impact on the pharmaceutical industry as well. It has helped scientists accelerate research and in some cases, it has been beneficial in testing for and curing diseases. For instance, the FDA recently approved a diagnostic COVID-19 test based on the CRISPR/Cas9 techniques perfected by Sherlock Biosciences.

From HIV and hereditary disease research, to finding faster, cheaper and accurate tests for the current COVID-19 pandemic, CRISPR/Cas9 is being used to create a lasting impact on science.

But just like a Swiss Army knife, there can be many unwanted and harmful consequences with CRISPR/Cas9 if the technology is not used wisely and carefully.

Scientists have long pondered the idea of using gene editing technology on human embryos to create future populations born without genetic diseases or with favorable traits. With CRISPR/Cas9, this is now possible. However, questions have arisen about whether such gene editing would be ethical. In fact, in 2018, a Chinese scientist, Dr. He Jiankui used CRISPR/Cas9 on human embryos to make them less susceptible to HIV. Though it hasn’t been confirmed if that experiment was truly successful, most people have regarded Jiankui’s work as highly controversial. Nevertheless, it has raised ethical questions about CRISPR/Cas9.

Scientists and world leaders must decide the conditions where CRISPR/Cas9 should be used. They must decide whether it is ethically acceptable for humans to change other human genomes. They must also consider how CRISPR/Cas9 might be weaponized.

Looking into the future, if human genome editing is allowed, are we ethically open to the idea of “designer babies”? Not only that, but in general, will everyone be able to afford CRISPR/Cas9 therapies? This concern was echoed by Columbia University professor Sam Sternberg, who develops CRISPR technology in his lab. One major concern, he said, would be equal access. If CRISPR/Cas9 is expensive, then only the rich will be able to use it, exacerbating socioeconomic inequality. Indeed, much more research and debate are necessary for CRISPR/Cas9 to be used on a more widespread level.

What we now know is that CRISPR/Cas9 is here to stay and it WILL impact our lives. From the food we eat, to the medicines we take, CRISPR/Cas9 has the ability to improve lives. Yet, just like any other powerful tool, the world needs to use it carefully and wisely. While it can lead to great innovations, it could also lead to serious global issues. CRISPR/Cas9 can be placed in the wrong hands and used for the wrong purposes. It’s up to us to decide how to employ this technology for better or for worse.

Samuel H. Sternberg works at Columbia University as an assistant professor in the Department of Biochemistry and Molecular Biophysics. His studies pertain to CRISPR and its sciences. He has published a book, together with Jennifer Doudna, about CRISPR technology called “A Crack in Creation.

This article was written by Simran Gohel. Simran and the cSw student editing team would like to thank Manasi Apte for serving as a mentor on this story. Manasi is a post-doctoral research fellow at the National Cancer Institute (NCI), which is a part of the National Institutes of Health (NIH). Manasi also works as a course instructor for ASBMB’s Art of Science communications Online course. As always, before leaving a response to this article please view our Rules of Conduct. Thanks! -cSw Editorial Staff