Language is defined as the words, their pronunciation and the combination that is understood by a community. Speech, on the other hand, is the ability to make sounds with muscles and vocal cords. Infants imitate new sounds heard from parents and then adapt their own babbling to form clear words. This is called “vocal learning.” However, researching early human language development is difficult because of ethical issues surrounding the study of human babies. As a result, scientists are turning to animals.

In search of the best species to study, scientists turned to another vocal learner, the zebra finch. Studying zebra finches in scenarios that mirror the human infant’s language learning process helps us understand vocal development. Dr. Michael Goldstein, an Associate Professor at Cornell University, has shown that a young finch’s environment must be stimulating for better song learning. Through his experiments, Dr. Goldstein confirmed that when the mother provided positive feedback, for instance by feeding or touching the chick with her wing or beak, the young finch changed his unclear sound patterns to produce a more adult-like song. Goldstein has shown that these interactions between the young finch and parent are key to song learning. In contrast, young finches were unable to form adult-like songs when alternative forms of communication were used. For example, listening to bird song recordings or interacting with parents on a computer monitor through “Bird-Skype,” a program designed to allow zebra finches to communicate digitally rather than beak-to-beak, proved to be ineffective.

Further zebra finch studies led to the finding that their neurological networks responsible for language development are similar to ours. Like humans, the zebra finch has a basal ganglia, a brain structure accountable for processing language. In that structure there is a region called “Area X,” which is partially in charge of processing reward. Goldstein explained that this anatomical finding helps to show why young finches correct their songs after receiving positive responses from their mothers. In other words, knowing that the basal ganglia processes both language and reward supports the belief that social motivation improves vocal learning in zebra finches. 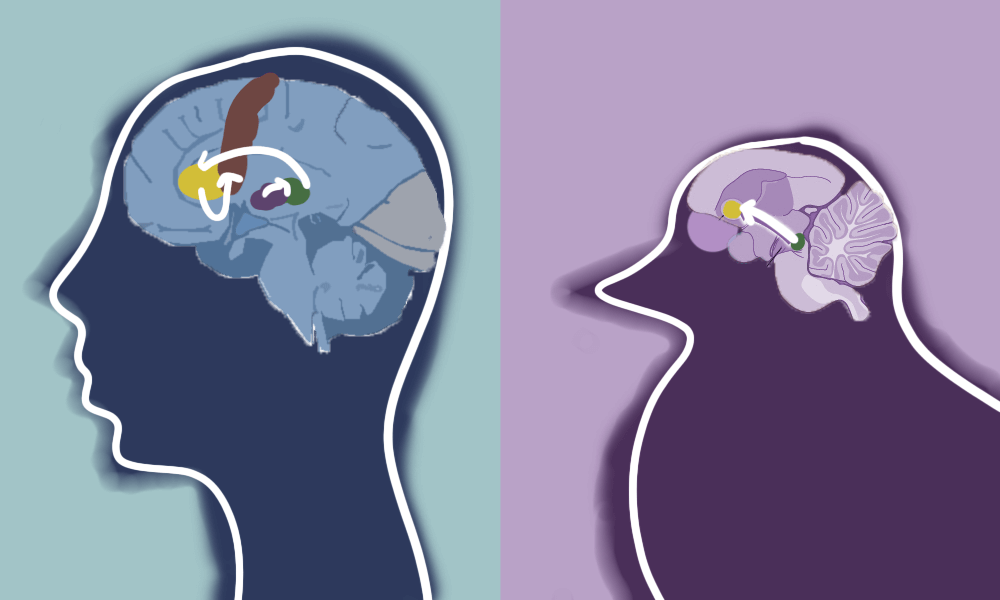 Other scientists who are looking into the genetics and brain circuitry of communication are also finding that infants must have a rich environment to develop language. Dr. Simon E. Fisher, the Director of the Max Planck Institute for Psycholinguistics in the Netherlands, entered this story in the late 1990s after using genetic sequencing techniques to understand one family’s inherited speech disorder. Fisher stated that mapping the process of language and speech disorders remains difficult because of the complexity of brain circuitry. But studying the zebra finch brain is helping scientists understand the development of vocal learning. Fisher summarizes that “there is an interplay between genetics and the environment.” Human babies instinctively babble, and the interaction between their genetic makeup and a rich learning environment allows for these sounds to develop into coherent words.

Dr. Goldstein took what was learned in this zebra finch research and applied it to intervention programs. One is a pilot called Toddler Talk. It was developed after a local public school system sought assistance for students from low-income families with underdeveloped language skills. The intervention teaches parents the necessary habits to improve parent-child interactions and thereby boost their child’s language skills.

Studies conducted with zebra finches have also helped infants who were born deaf. For example, Goldstein is observing 9 to 12-month old babies who were born deaf and received cochlear implants. The research with zebra finches showed that keeping the child motivated during vocal learning improved speech and built a larger vocabulary. This observation reinforces the idea that our language and reward centers are somehow connected. Consequently, Goldstein is designing a set of interventions to teach parents the most effective ways to motivate their infants and improve their language skills.

According to Goldstein, “this system of mutually engaged infants and receivers constitutes an active feedback mechanism that plays a strong role in vocal learning. If we can change social motivation and reward, then we can change the sound [and] the words.” Parents do not need to increase the amount of time they spend with their infants; the key is the quality of the parent-child interactions. When interactions are stimulating and diverse, the child’s vocabulary will improve more rapidly.

By studying the behavior and brain activity of zebra finches, scientists have increased their understanding of early childhood language development. Learning happens when a parent provides a responsive environment along with consistent, direct feedback. We now know that vocal learning is influenced by positive emotions and behaviors that can transform young learners’ babbling to more complex speech patterns. When infants are in a stimulating environment, they are motivated to practice, leading to improvement in both meaningful language and the skill of learning. If current research demonstrates that long-term positive parent-child interactions (or interactive feedback) increase vocal learning, then similar approaches may be used to improve speech and language development in at-risk infants.

Dr. Michael Goldstein is an Associate Professor of Cornell University and Director of the Behavioral Analysis of Beginning Years (B.A.B.Y.) Laboratory. He received his Ph. D. in Developmental Psychology and Animal Behavior in 2001 from Indiana University. Since then, he’s been working with infants to better understand their vocal learning processes. In 2008, he won the Distinguished Early Career Contribution Award from the International Society on Infant Studies.

Dr. Simon E. Fisher is the Director of Max Planck Institute for Psycholinguistics. He is also a Professor of Language and Genetics at the Donders Institute for Brain, Cognition and Behaviour in Nijmegen, the Netherlands. His research focuses mainly on genetic processes within the brain and the role of FOXP2 in language development. He was awarded the Eric Kandel Young Neuroscientists Prize in 2009.

This article was written by Nicholas Skarupa. As always, before leaving a response to this article please view our Rules of Conduct. Thanks! -cSw Editorial Staff