The universe began with the Big Bang. Billions of degrees hot, the baby universe swarmed with elementary particles, light, and energy. Fast forward 13.8 billion years, and you, a complex organism, are reading these words today.

You are made up of atoms—seven billion billion billion of them. That’s a mind-boggling number, but you are more than the sum of your atoms. Smash that many atoms together and you won’t get a functioning human being. We know how matter— like protons, neutrons, and electrons—formed. But how did life begin? How did we come to be?

Such questions have been generating lively discussion since 1962 when the RNA (ribonucleic acid) world hypothesis was introduced by the late MIT physicist Alexander Rich. The theory holds that a primitive form of RNA acted alone in carrying out the life functions of early organisms. Essentially, the hypothesis suggests that self-replicating RNA – RNA that can make copies of itself – existed before more stable DNA and proteins. In this scenario, RNA would have catalyzed chemical reactions in primitive life before the evolution of DNA and proteins.

To understand this concept, imagine teaching how to fold paper airplanes. The teacher passes out handouts with instructions that the students fold into paper airplanes. Since the instructions are all used up, the teacher has to make more copies for the next class. One day, the teacher gets a blackboard and realizes it’s more efficient to write the instructions on the board only once and to provide paper for folding the planes. The RNA world hypothesis says that RNA was this teacher making individual copies of instructions over and over again before a more efficient method of information distribution – the current system of DNA-RNA-protein production – evolved. 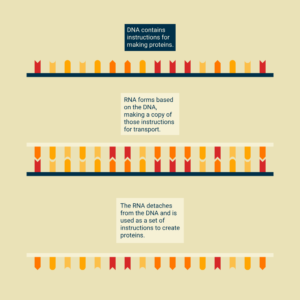 Other scientists, however, maintain that there are alternatives to the popular RNA world hypothesis. For example, Charles Carter, Ph.D., a researcher at the University of North Carolina at Chapel Hill, rejects the RNA world hypothesis primarily because RNA does not appear to function well as a stand-alone catalyst: it is single-stranded and relatively unstable compared to sturdier double-stranded DNA. His research suggests RNA and small protein structures called peptides may have evolved simultaneously, so primitive life processes were first fueled by a peptide-RNA complex – a combination of proteins and RNA – rather than just RNA. This way, the suspiciously weak RNA enzyme wouldn’t have acted alone; it would have been assisted by proteins, which are more efficient catalysts for life functions.

Dr. Carter and his colleagues argue that RNA could not have performed catalysis alone because it would have needed proteins in a continuous loop that causes evolution and diversification of life. According to Dr. Carter, RNA requires proteins to create more proteins, an aspect that he believes the RNA world hypothesis does not explain adequately because it assumes that RNA existed before proteins.

So why does any of this matter? One of the most compelling motivations for cracking the origin-of-life puzzle is that in doing so, we may better understand the mechanisms by which independent molecules combine naturally to form complex structures. Conclusive findings in this area may introduce insights into medical mysteries, such as how Alzheimer’s disease proteins are formed. Research is continuing since scientists around the world have yet to reach a verdict on the origin of life. What we do know for sure, whether life began with RNA, peptides and RNA, or something else entirely, is that you can thank primitive processes for making you what you are today.

Dr. Harold Bernhardt is a research fellow in the Department of Anatomy and Department of Biochemistry at the University of Otago in Dunedin, New Zealand. Although he is interested in a range of things, his research focuses on the evolution of tRNA (transfer RNA) and the origin of life, particularly concerning the RNA world hypothesis. Dr. Bernhardt was awarded a grant from the Marsden Fund in 2013 to investigate the prebiotic chemical evolution of RNA.

Dr. Charles Carter, Jr. is a professor of biochemistry and biophysics at the University of North Carolina at Chapel Hill. He obtained his Ph.D. at the University of California, San Diego in 1972, and since then he has been studying the origins of enzyme catalysis. Dr. Carter’s research challenges the RNA world hypothesis and offers additional insight into the origin of life.

This article was written by Emily Jiang. As always, before leaving a response to this article please view our Rules of Conduct. Thanks! -cSw Editorial Staff