One cell. One mutation. That’s all it takes for cancer to spread throughout someone’s body. Cancer is the second leading cause of death in the United States, killing over 500,000 people each year. Nearly 40% of men and women develop cancer at some point in their life and the number of people diagnosed is rising. Thousands of scientists and doctors have dedicated their lives to finding a cure for cancer by studying immunotherapy, gene therapy, or, for one group of scientists, elephants.

It all started in 1977 with Richard Peto, a professor at the University of Oxford in the United Kingdom, who theorized that large animals, with more constantly dividing cells in their bodies, would develop cancer at higher rates than smaller animals since there were more opportunities for cells to mutate. However, when he looked at the data, he found, surprisingly, that there was no correlation between the size of an animal and its cancer mortality rate. This became known as Peto’s Paradox.

Why are large animals like elephants equally or even less likely to die from cancer than other animals? A few years ago, Dr. Carlo Maley, Dr. Joshua Schiffman, and their teams at University of California San Francisco (UCSF) and the Huntsman Cancer Institute (HCI) at the University of Utah explored this question. Dr. Maley and his team first confirmed the findings in Peto’s Paradox by examining the San Diego Zoo database that tracked the cause of death of animals in the zoo. Next, they found that across thirty-six mammalian species, the size and lifespan of the organism had no impact on their cancer mortality rate. To understand what was going on, Dr. Schiffman and his team examined blood from elephants, the largest land animals, and observed white blood cell response to DNA damage. In the experiment, human and elephant cells were exposed to ionizing radiation, which causes mutations that can lead to cancer. The study revealed that the TP53 gene was involved in the elephants’ ability to kill cancer cells before cancer killed the elephants. 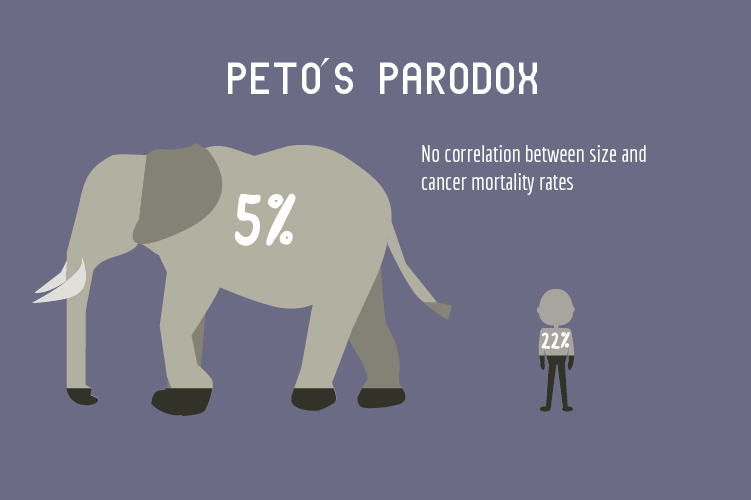 The p53 protein, produced by the TP53 gene, acts as a natural tumor suppressor by regulating cell division and death to reduce the risk of cancer. By examining elephant DNA, Dr. Maley and his team found that elephants carry twenty TP53 genes. In comparison, humans only have one gene made up of two copies known as alleles. The absence of even one allele increases the likelihood of getting cancer to 90%.

Nature has already developed a solution for cancer. According to Dr. Lisa Abegglen, a researcher in Dr. Schiffman’s lab, elephants have evolved extra cancer-fighting genes to offset their inherently high risk of getting cancer.

At the moment, the team is trying to better understand the TP53 gene and figure out how they can apply their insights to advance human cancer research, a process that Dr. Abegglen says will take “3-5 years, optimistically.”

However, applying this knowledge to humans isn’t so simple. Dr. Abegglen explains that although the p53 protein is the “guardian of the genome” and can protect the cell by killing cancer cells, too much active p53 protein will also kill normal cells. This was clear when one extra copy of TP53 was added to mice; the mice did not get cancer, but their lifespan was significantly shorter.

So how does the elephant survive with so much extra p53? The answer is that when p53 is properly regulated or controlled by the cells, cancer resistance is possible without premature aging or early death. This was proved with mouse models when the extra copy of p53 was placed under the control of a p53 promoter and cancer resistance was observed without premature aging. Although p53 protein regulation in elephants is yet to be understood, the scientists in Dr. Schiffman’s lab are well on their way to translating mechanisms of cancer resistance in elephants into effective treatments for cancer.

Next time you go to the zoo and see the elephant enclosure, think about the contribution these majestic creatures have made to cancer research. After all, their genes may hold the key to a cancer-free society.

Dr. Lisa Abegglen is an Instructor at the University of Utah (Department of Pediatrics). She works closely with Dr. Joshua Schiffman and their team of scientists. Her work focuses on genetic cancer predisposition syndromes and comparative oncology. Currently, she is researching molecular mechanisms of cancer resistance in elephants to hopefully apply it to improve human health in the future. Her past experience as a drug discovery scientist in the industry will help with these efforts. She shares her passion for science with her children (4 and 6 years old), who enjoy visiting the lab.

This article was written by Macafie Bobo. As always, before leaving a response to this article please view our Rules of Conduct. Thanks! -cSw Editorial Staff