Monica Cliff
“My legs feel shaky sometimes and I feel like I have the flu.” This is how Monica Cliff of South Egremont, Massachusetts, describes her symptoms as one of tens of thousands of those suffering from Lyme disease. Symptoms of the disease include rashes, arthritis, joint swelling, and heart palpitations, among others. According to the Centers for Disease Control and Prevention, Lyme disease is the fastest growing and most commonly reported vector disease, a disease transmitted by one organism to another, in the United States. Lyme disease is transmitted through the bacterium Borrelia burgdorferi when deer ticks, Ixodes scapularis, latch on to their hosts and feed on the hosts’ blood. In 2015, there were over 25,000 confirmed cases of Lyme disease, with an estimated additional 10,000 unreported cases.

Monica brushes a strand of silvery hair out of her face. “I’m on my last week of doxycycline. Hopefully, I should be back to my old self soon.” Some sufferers of Lyme disease are not as lucky as Monica—about 20% of patients are unresponsive to antibiotic treatment and must live with symptoms for the rest of their lives. While doxycycline is an antibiotic used to treat and prevent the onset of Lyme disease after a tick bite, there is currently no true preventative treatment against the onset of Lyme disease. As of now, the only ways to lower infection risks are by wearing long clothing in tick-ridden areas and by performing thorough tick-checks after possible exposure.

Antibodies to the Rescue
Dr. Mark S. Klempner of MassBiologics of the University of Massachusetts Medical School has been working on an alternative preventive measure for Lyme disease—important research given the great number of people at risk for Lyme disease. Klempner and his team first identified a large number of human antibodies, or proteins, that are capable of killing the Lyme disease-causing bacteria, Borrelia burgdorferi. Unlike a vaccine, which prompts the immune system to generate a large number of antibodies, most of which do not prevent disease, Klempner’s team looked for the one antibody that could provide immediate protection from infection. To find the most potent antibody, he and his team tested mice antibodies to see if they could protect the mice from infection after being bitten by ticks carrying Lyme disease. “We’re getting close to making the final decision,” says Klempner, who hopes to soon identify an antibody capable of preventing Lyme disease even before a person is bitten by an infected tick. Klempner’s team is confident that an effective Lyme medication will become available in the next few years. 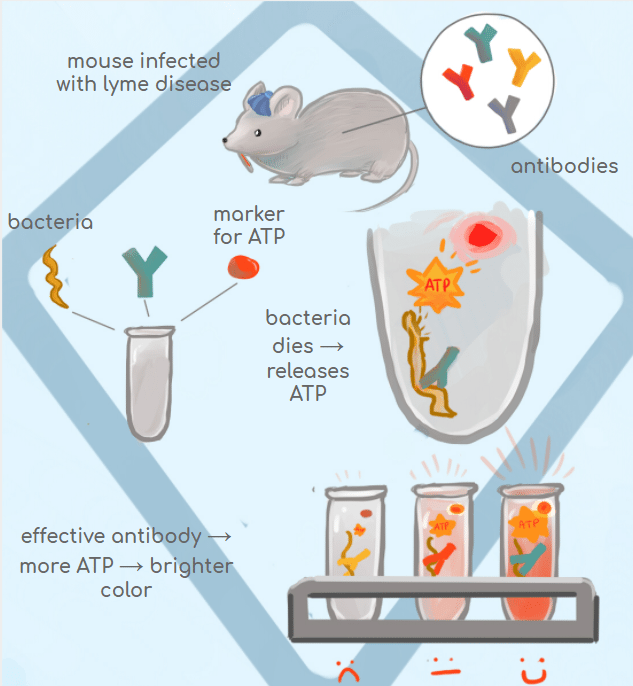 A Failed Attempt at a Vaccine
With millions of Americans at risk, it might seem that the public would be overjoyed at the development of a safeguard against Lyme disease. But, even after the medical hurdles are cleared, there remain social battles to be fought. In the late 1990s, a Lyme vaccine was invented that became a case study for the way in which public image can affect the success of a pharmaceutical product.

Industry giant SmithKline Beecham, now GlaxoSmithKline, had created a vaccine against Lyme disease that was 80% effective and well-regarded in the medical community. But soon after the vaccine became available for humans, complaints of the vaccine causing arthritis arose and, with the support of anti-vaccination groups, dominated the news coverage. Although investigations showed no link between the vaccine and arthritis, the public remained wary and sales of the vaccine plummeted. In the end, SmithKline Beecham pulled it from the market as financial problems were looming.

What Now?
Today, interest in Lyme disease prevention is growing as Lyme disease affects more and more people. Some pharmaceutical companies are even looking to relicense the original SmithKline Beecham vaccine. But for now, Dr. Klempner’s approach seems like a good bet, in part because he sees it as a way to avoid the negative media attention associated with the earlier vaccine. “It’s unfortunate that I couldn’t have just gotten the vaccine,” says Monica. “It’s infuriating that it exists, but there is no way to access it.” Still, she is reassured by the prospect of a new preventive measure. “I’m not sure if it is too late for me, but it would be great for my kids.”

This article was written by Annabelle Burns. As always, before leaving a response to this article please view our Rules of Conduct. Thanks! -cSw Editorial Staff