Malaria is a deadly, blood-borne disease transmitted by mosquitoes carrying the Plasmodium parasite. An infected mosquito or a “malaria vector” can be considered a liaison of sorts, traveling from an infected person to its next victim. Dr. Joseph Vinetz, a professor at the University of California- San Diego, and his team are collaborating on a promising new vaccine candidate to combat malaria using algae. To learn more, cSw spoke to Dr. Joseph Vinetz about his work.

QUESTION: What about infectious diseases appealed to you?
ANSWER: I think I liked them because they were unusual. They were gross and kind of disgusting because of the pus and worms. I was also always interested in evolution, which has to do with how things interact in the environment. Infectious disease, I think, turned out to be a very good model for that.

Q: Have there been any significant advancements in malaria research and treatment?
A: In my personal opinion, and this is shared by a small number of people in the field, we think that preventing populations of people from infecting mosquitoes would be the most effective way to eradicate malaria. This is quite controversial, and very few resources are put into it, but the science is very logical. It is the opposite of the usual approach of a vaccine that prevents mosquitoes from infecting people. What we’re discussing today is how to make a malaria vaccine to inject into people so that family and friends and neighbors don’t get infected. That’s called a transmission blocking vaccine. If you prevent people from infecting the mosquitoes, we reason and argue with data, then we can interfere with the malaria life cycle.

Q: How did you know that algae would be effective in your study?
A: Dr. Stephen Mayfield, another professor at UC San Diego, focuses on algae and understanding the biology of algae. He came to me and said “Joe, are you interested in collaborating with me on making a malaria vaccine in algae?” And I was. He’s an algae expert and I’m a malaria expert, so it’s a great collaboration.

Q: Could you describe what the protein Pfs25 is and how it relates to your vaccine?
A: The parasite that causes malaria has a protein called Pfs25 on its surface and that parasite lives in the gut of a mosquito. The idea for this vaccine is that after being vaccinated, people’s immune system will make antibodies that will work against Pfs25. When a mosquito sucks blood out of somebody with malaria who has been vaccinated with this protein, both the antibodies and the parasite would go into the mosquito’s gut. This combination would block the parasite’s ability to infect the mosquito. The trick is that the Pfs25 protein isn’t made by the parasite in a human, only by the parasite in the gut of the mosquito. So to use it in a vaccine, you have to make the Pfs25 protein in a laboratory. To do that, we made the protein recombinantly in algae. In other words, we genetically modified algae to make this protein, like a little Pfs25-manufacturing factory. Then we purified that protein and made it into a vaccine. So far, we have tested it in mice. We’re still very excited about trying to push the science ahead so that we can test the vaccine in people someday. 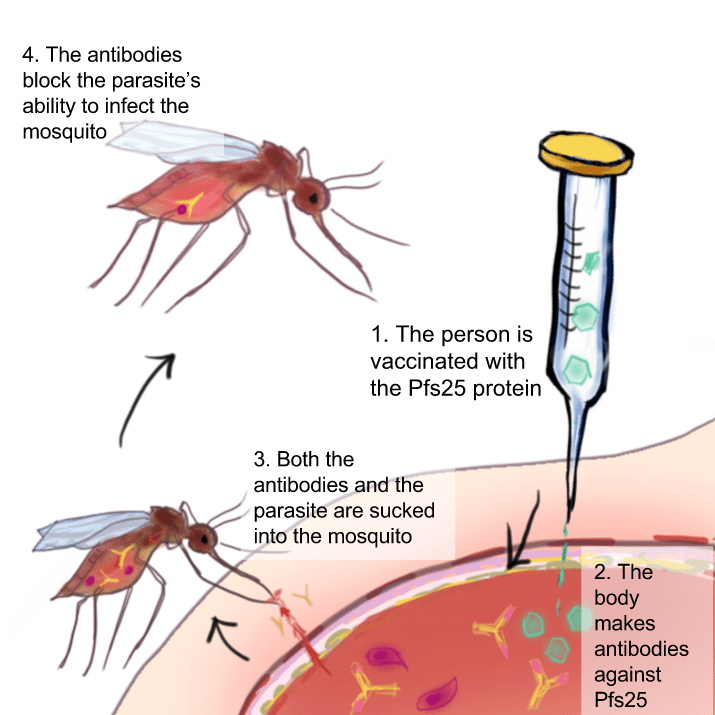 While there is no current vaccine for malaria, countless infectious disease researchers like Dr. Vinetz and his team are working to give us hope for the future. With their help, people all over the world may someday view a mosquito as a nuisance rather than a killer.

Dr. Joseph Vinetz is an infectious disease specialist based La Jolla, California. He graduated from Yale University in 1991 and completed his training in internal medicine at Johns Hopkins University. He has been studying the malaria parasite for over 28 years and has been working on a candidate vaccine for malaria for over twenty years. His accomplishments aren’t limited to advancements in understanding in malaria as he has also been researching other tropical diseases like leptospirosis and brucellosis. In addition, Dr. Vinetz is a talented clarinetist.

This article was written by Sean Oddoye. As always, before leaving a response to this article please view our Rules of Conduct. Thanks! -cSw Editorial Staff