You may have thought that talking animals are the stuff of children’s fiction, but perhaps we aren’t always listening. From crows to pigeons, some animals can master abstract concepts such as similarity and difference. At the University of Iowa, Professor of Comparative Psychology Dr. Edward Wasserman has been fascinated by the study of human versus animal thinking. During his long laboratory career, he has picked animals’ brains, and it seems they have something to tell us.

Crows
Crows are known for their intelligence, particularly in regard to their use of tools. But, a recent study showed that after being trained to match items by identical appearance, crows spontaneously learned to match items by similarity and difference. Matching by physical identity is called Identity Matching To Sample, or IMTS. For instance, if the sample to be matched were AA, the crow’s correct choice would be AA because both pairs are identical. Matching by a relation, such as similarity, is called Relational Matching To Sample, or RMTS. If the original sample were AA, the correct choice would be BB. Although BB doesn’t physically match AA, both AA and BB represent a pattern of two of the same letter. In this particular study, crows were able to demonstrate RMTS at a 73-78% success rate even though they’d only been trained in IMTS. It is unclear how the crows do this, and when asked, “Was the training really necessary for the crows?” Dr. Wasserman replied, “I don’t know. That’s why we do science!” Could future experiments test crows’ ability to solve relational problems without prior training in physical identity? We’ll just have to wait and see! 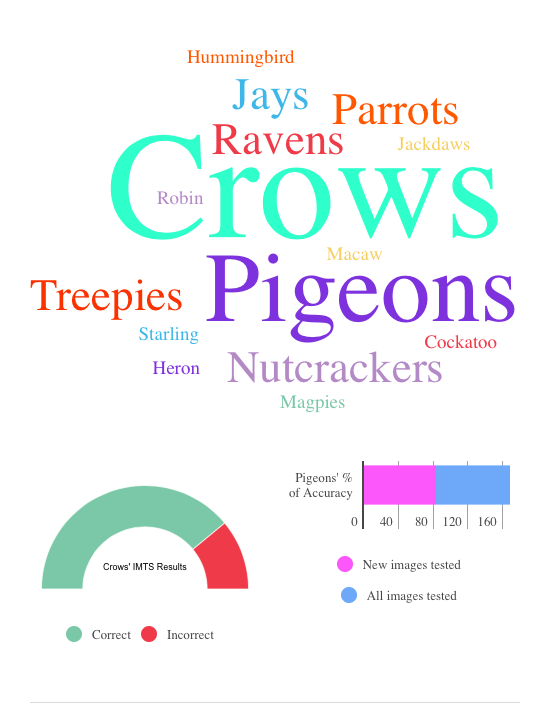 Pigeon Pathologists
While it’s fascinating that crows can compare the relationships between objects, can animal cognition benefit humans directly? Pigeons have been trained to perform, according to Dr. Wasserman, “diagnostic tasks for which people are unprepared.” In a study over 10 to 15 days, pigeons were shown images of cancerous and normal tissues. If they correctly identified the images of cancerous tissues, they were rewarded with peanuts. After the training, pigeons achieved 85% accuracy for identifying all the images tested, and 83% for identifying pictures they’d never seen before. Unlike humans, Dr. Wasserman points out, pigeons are less expensive, don’t grow bored, and have a secret to identifying cancer that humans haven’t figured out yet. The pigeons aren’t aware of what they’re doing; they simply perceive a difference in the images of the tissues that humans don’t notice. While we still have a lot to learn about how pigeons do this, birds with two weeks of training may eventually have something to teach doctors with years of medical training.

They Talk, So Listen! to Your Animal Teachers
“We haven’t cracked their language and they haven’t cracked ours,” says Dr. Wasserman. But, just because we don’t understand each other doesn’t mean we can’t ultimately learn from one another. “We’ve been the most destructive species to ever set foot on the planet,” Dr. Wasserman explains, “so I think we have a real responsibility to try and make things right…take better care of animals and of the planet, and in the process take better care of ourselves.” There you have it; animals do talk, and we can really benefit from listening to and taking care of our wild teachers.

This article was written by Amy Albin. As always, before leaving a response to this article please view our Rules of Conduct. Thanks! -cSw Editorial Staff