It is a summer night and a warm Californian breeze blows through the window of a home in Monterey. Anne is sharing her son Ben’s pillow. Each night she recalls when he spoke his first words. Though full of life like any two-year old, it was 10 months after the rest of his peers that Ben attempted his first few prattles. When Ben turned three, he was diagnosed with autism, a developmental disorder that affects a person’s ability to speak and interact with others. Even at five, he still struggles to count numbers and utter words easily.

Meanwhile, across the country, in a lab at Harvard, a tall, middle-aged woman interacts with her African Grey parrots. Armed with a hidden stash of walnuts, bananas, and toys, she works with an assistant as her parrots closely watch an animated conversation between them.

Through this process, the birds watch and slowly begin to understand that the sound “key” is not just any weird noise. If said correctly, they can even get a reward. After many days of effort, the parrots attempt to say the word and are rewarded with a prize. The trainers continue with this process, known as the “model-rival” method, for several weeks to make sure the birds understand the word and what it represents.

They Don’t Just “Parrot”
Surprisingly, even with their walnut-sized brains, Greys are able to respond and perform at the same intellectual level as a 5-year old child. Dr. Irene Pepperberg, a parrot-lover from childhood and chemist turned “bird-scientist,” believes that animals have human-like cognitive abilities. She decided to study African Greys because they learn the quickest and speak the clearest.

When Pepperberg began work with her first Grey, Alex, in 1977, she designed a curriculum that modeled developmental work with young children. Pepperberg began teaching her parrots labels, colors, shapes, and other characteristics. With the “model-rival” method, Alex and the other Greys at the lab went on to acquire over 100 words in their vocabulary over several years. When asked questions like “What color?”, “What matter?”, or “What shape?”, the birds would respond with more than 85% accuracy. They could even make inferences. For example, seven is bigger than six because it is higher up on the number line.

How Do They Do It?
In humans, the frontal lobe of the brain called the Broca region is recognized as the center for language learning. Greys don’t have a Broca. Instead, they have “vocal nuclei” with a smaller language processing ability. The vocal nuclei are located near the motor cortex in the brain. When Greys hear and see the “model” answer a question, the connection between the action and word are made more quickly than when they hear the word without seeing the action. 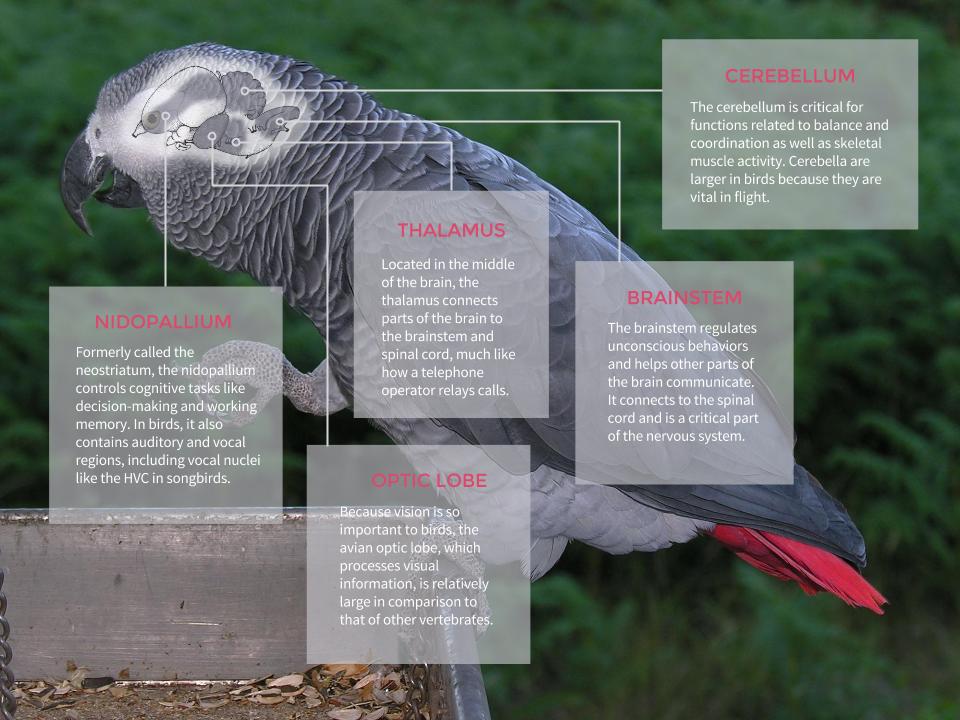 It turns out autistic children also have an incomplete Broca with fewer folds than their normal peers.

On learning about the success of teaching parrots how to speak, Dr. Diane Sherman, a Monterey-based occupational therapist, partnered with Dr. Pepperberg and adopted a similar “model-rival” technique to teach her autistic patients.

When Anne heard about the studies, she volunteered to send Ben as a participant. Results of the tests have been encouraging. Autistic children learn, retain, and understand new concepts at a significantly higher rate through this interactive and reward-based technique than they would through standard teaching methods. Ben has made rapid progress and has closed a big gap in his learning.

African Greys have helped us make enormous strides in understanding and overcoming language-learning disabilities. But we have just scratched the surface on what these birds can teach us about re-wiring autistic brains.

This article was written by Akila Saravanan. As always, before leaving a response to this article please view our Rules of Conduct. Thanks! -cSw Editorial Staff