Meeting Dr. Neubauer
The brightest among us are often the quiet, introspective type. During an interview with distinguished scientist Dr. Judith A. Neubauer, I could see that she is equally as vivacious as she is reflective.

As we discussed her various passions and interests, including underwater photography and scuba diving, the glint of excitement in her eyes was unmistakable. A professor in the Division of Pulmonary and Critical Care Medicine at Rutgers-Robert Wood Johnson Medical School, Dr. Neubauer explores the process of breathing, neurological connections, and the specifics of a respiratory disorder known as Obstructive Sleep Apnea (OSA). Yet even after many years of studying this process, she remains passionate about understanding the mechanics of breathing. Respiration takes her breath away.

Breathe In…
Breathing is the melody of life. If a pulsing heart is the drum beat that regulates life, then breathing is the symphony that plays in time with it, establishing a person’s individualized rhythm. Symbolism aside, the allure of respiration lies in its biology, which is the key focus of Dr. Neubauer’s interest. She studies how hypoxia, or low levels of oxygen in the body, can affect respiration. Periods of hypoxia are characteristic of OSA; therefore, studying this sleep disorder allows Dr. Neubauer to better understand hypoxia and respiration. OSA is the most common form of sleep apnea and features fluctuations in oxygen levels as breathing repeatedly starts and stops. Dr. Neubauer is currently enrolling patients in clinical trials where she is correlating the activity of the enzyme heme oxygenase with OSA as a potential treatment target. 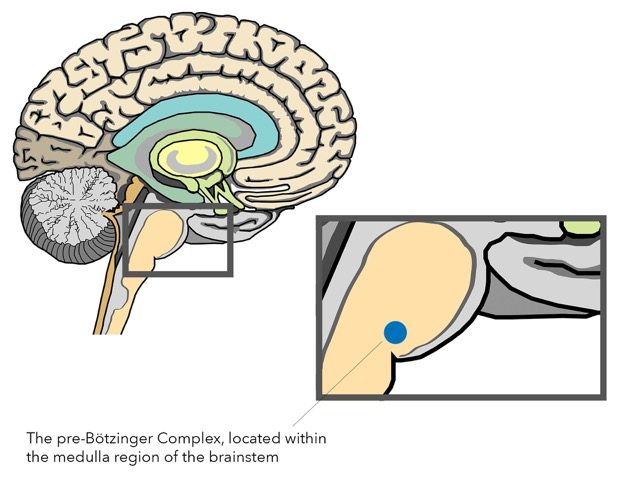 Pre-Bötzinger Complex
In the brain, there is a respiratory network known as the pre-Bötzinger Complex, which is comprised of micro-networks that help define breathing. Dr. Neubauer’s research led to a groundbreaking discovery when she and her laboratory team uncovered important information about one such network, the pacemaker region, which functions as an oxygen sensor. Her current studies aim to see if heme oxygenase is used as an oxygen sensor in the neurons of the pacemaker region. Dr. Neubauer has found that the pacemaker region works in concert with another section of the brain that allows for autoresuscitation. Known as the “Lazarus Phenomenon,” autoresuscitation is the rare event of coming back to life after CPR.

…Breathe Out
From OSA to aquatic activities, Dr. Neubauer’s curiosity and love for learning are evident in everything she does. She explains, “It’s about the passion.” As her research dives deeper into breathing, what she discovers is sure to take our breath away.

This article was written by Manasa Gadiraju. As always, before leaving a response to this article please view our Rules of Conduct. Thanks! -cSw Editorial Staff