Can Herpes Unravel the Mysteries of Alzheimer’s Disease?

Home » Alzheimer's » Can Herpes Unravel the Mysteries of Alzheimer’s Disease?

In Brief
A few years ago, researchers confirmed a surprising link between Alzheimer’s disease (AD) and the herpes simplex virus. Now, a new model of the human brain may help us better understand that connection.

Dr. David Kaplan, a professor of engineering at Tufts University and his team created a 3-D model that mimics similar components of the human brain and shows a possible causal relationship between the herpes simplex virus and sporadic Alzheimer’s. This model “can potentially create a whole new way of thinking about or understanding this devastating disease and finding interventions,” said Dr. Kaplan during a recent Zoom interview.

Two primary signs characterize Alzheimer’s disease: amyloid plaques and neurofibrillary tangles, which involve two proteins: amyloid beta and tau. Amyloid plaques are made from the abnormal grouping of the amyloid beta protein. They’re also implicated in the creation of neurofibrillary tangles (NFTs) which are made from the tau protein. The tau protein is toxic to neurons in the brain and the resulting cell deaths drive a process called neuroinflammation. Neuroinflammation is another major contributor to the disease process. It causes oxidative stress, which essentially “sucks the energy” out of a neuron by destroying its cellular components. This process leads to further cell death.

Understanding the neurological symptoms of Alzheimer’s, researchers found surprising similarities with herpes simplex virus (HSV-1). HSV-1 is a DNA virus that lives in a dormant state in cells within the nervous system.

The possible connection between herpes and Alzheimer’s was first identified many years ago by Dr. Ruth Itzhaki, who is currently at The University of Manchester. She observed that patients with sporadic (non-heritable) Alzheimer’s disease had high levels of HSV-1 DNA in the amyloid plaques harvested from their brains after death. HSV-1 that manifests in the brain mimics the same symptoms as Alzheimer’s because it induces neuroinflammation.

The virus sparks the creation of amyloid plaques in an attempt to protect the brain from HSV infection. These plaques then lead to neuroinflammation similar to Alzheimer’s and result in oxidative stress and neuronal cell death. 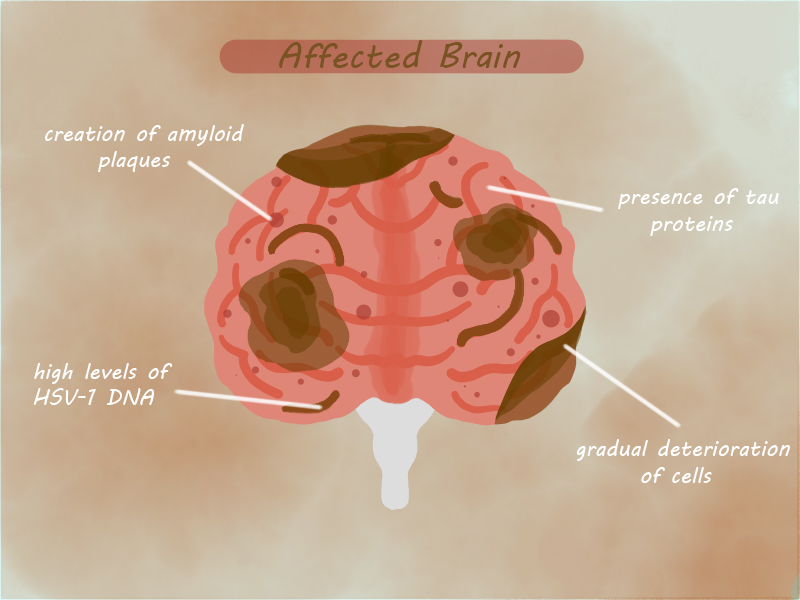 Dr. Rudolph Tanzi, a professor of neurology at Harvard Medical School, compared the disease process to a forest fire. “Amyloid plaques are the match and herpes virus is striking the match, so the herpes could be causing the plaques to form in someone that is younger and all those plaques drive a bunch of tangles to form like brush fire. For decades, those brush fires keep spreading and they start a forest fire. Eventually, those forest fires come together and you have a massive amount of neuronal cell loss, synapse loss and now you have dementia.”

In 2014, a team led by Dr. Tanzi and Dr. Doo Yeon Kim, also from Harvard, created a novel 3-D gel model of Alzheimer’s. This model was dubbed ”Alzheimer’s in a Dish,” since it formed plaques and neurofibrillary tangles in neural cells containing genes associated with familial (inherited) Alzheimer’s disease. An accurate and efficient model that incorporates various aspects of the human brain is vital to helping them better understand the journey from plaque and tangle formations to neuroinflammation and dementia.

The model created by Drs. Tanzi and Kim was the first to exhibit both amyloid plaques and neurofibrillary tangles while showing causality between the two. The two developed an updated version of the model in 2018. It also showed neuroinflammation, which helped provide a more thorough visual of the Alzheimer’s brain with all three key reactions that lead to brain cell death.

Dr. Kaplan created his 3-D model to study sporadic Alzheimer’s, which accounts for 95% of cases. The rarer early-onset version (EOAD), which occurs at the age of 60 or younger, makes up the rest. This model is unique because it induces Alzheimer’s-like features without using genetic factors.

Dr. Kaplan’s team created their “3-D human brain-like tissue model” by forming a grey matter imitation from silk sponges and infusing it with a collagen gel that was molded into the shape of a donut. The team then poked human-induced neural stem cells (hiNSC) into the sponge donuts. This created an ideal environment for transforming the hiNSC’s into various other neural cells to mimic the environment of a brain.

Dr. Kaplan says the new 3-D model allows for easy and quick visualization of the neural pathways. He expands by saying that, “It is very important to have a tissue model with very rapid readouts of potential Alzheimer’s effects because it suggests that they can use the model for drug screenings, interventions and to apply to clinical trials.”

In the Kaplan lab, researchers found with low levels of the virus, Alzheimer’s-like features appeared. These include dense plaque-like formations (similar to amyloid plaques in sporadic Alzheimer’s disease) and neuroinflammation. However, when researchers used antiviral medications to treat the plaque-like structures, these formations were reduced, offering hope that a similar treatment might work.

To continue his research, Dr. Kaplan hopes to include a filtration network that functions like the blood brain barrier into his 3-D model to make it more physiologically relevant. He expects his model will be useful in research for various viruses, including SARS-CoV-2. “There are a lot of indications of brain related disorders from COVID-19,” he says. “We can look for treatments now instead of waiting for when people begin to have long term chronic problems.”

Meanwhile, at Harvard, Dr. Tanzi has been using variations of “Alzheimer’s in a Dish’’ to work on a drug to treat familial EOAD as well as herpes-induced amyloid plaques.

“It took us twenty years, but that’s how long things take sometimes,” Tanzi says. If it works, “it’s going to change the world.”


Content Experts
Dr. David Kaplan is a Stern Family Professor in Engineering at Tufts University and he is the chair of the Department of Biomedical Engineering. His research focus is on bio-polymer engineering, regenerative medicine and functional tissue engineering. His lab pioneered the use of silk-based bio-materials in regenerative medicine and has created complex 3D tissue co-culture systems for use to study various diseases.

Dr. Rudolph Tanzi is the Joseph P. and Rose F. Kennedy Professor of Child Neurology and Mental Retardation at Harvard University and he serves as a Director of the Genetics and Aging Research Unit at Massachusetts General Hospital. He also directed the Alzheimer’s Genome Project, which identified many new Alzheimer’s genes. He has co-authored several books including Super Brain, Super Genes, and The Healing Self.

This article was written by Shwetha Nidyanandh. Shwetha and the cSw student editing team would like to thank Phoebe Hall for serving as a mentor on this story. Phoebe Hall is the assistant director of biomedical communications at Brown University. As always, before leaving a response to this article please view our Rules of Conduct. Thanks! -cSw Editorial Staff

Shwetha Nidyanandh is a junior at Interlake High School in Bellevue, Washington.