“Alligator pie, alligator pie, If I don’t get some I think I’m gonna die.” As it turns out, this line from the children’s poetry book Alligator Pie by Dennis Lee may have some truth behind it. While no one is suggesting that alligators should become a new food group, researchers have discovered a type of molecule in alligator blood that may help fight infection — a growing problem in modern medicine.

Alligators are fascinating reptiles with near supernatural capabilities. The American alligator, Alligator mississippiensis, is notorious for being an especially robust creature that can regenerate lost limbs, grow new teeth, and survive exposed wounds with little to no risk of infection. Researchers like Dr. Barney Bishop, an associate professor in the Department of Chemistry and Biochemistry at George Mason University in Virginia, are captivated by this animal’s ability to avoid infection and are trying to figure out the secret to its immunity.

Unlike alligators, humans are very vulnerable to infections, with infectious diseases killing over ten million people each year worldwide. Unfortunately, the spread of infection is even common in medical facilities. According to The Alliance for Aging Research, nearly 99,000 people in the US die from hospital-acquired infections every year. But, with promising research on alligator blood, these numbers could change.

So, what’s the secret to an alligator’s ability to deal with infection? Dr. Bishop believes it is something called antimicrobial peptides. A peptide is a biological molecule found in the body that plays a key role in structure, function, and regulation of cells. Antimicrobial peptides are a specific type of peptide that works to kill harmful microorganisms such as bacteria and other microbes that cause infections. These antimicrobial peptides help stimulate the American alligator’s immune system to respond to bacteria and other disease-causing molecules faster and more effectively than the human immune system. 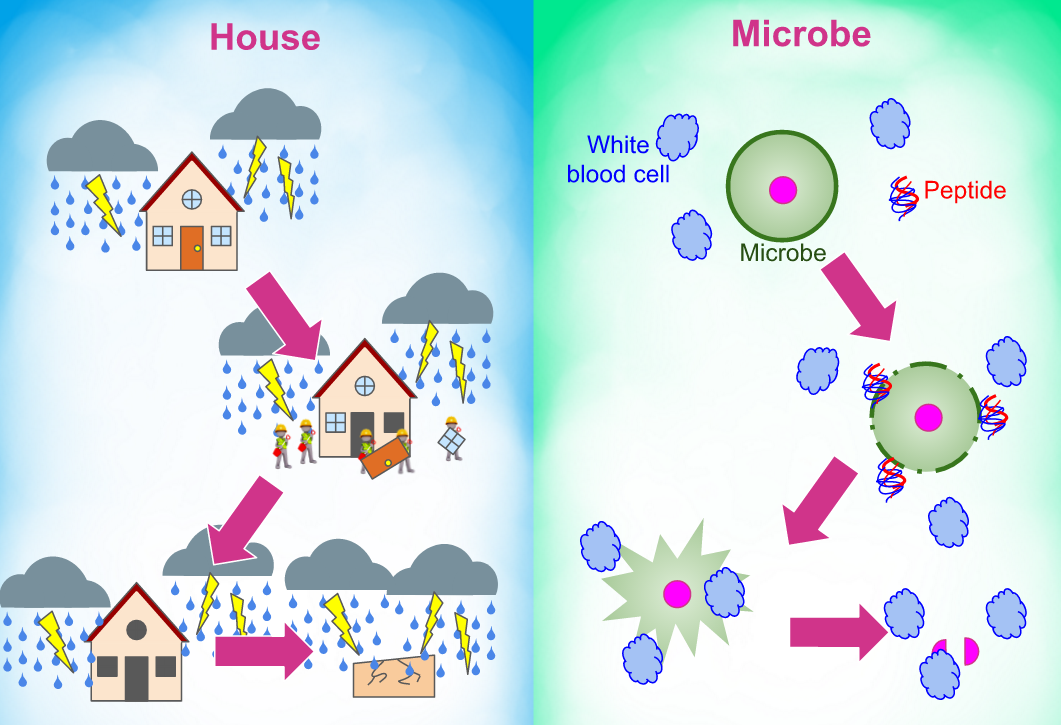 Think of antimicrobial peptides as construction workers removing the windows and doors of a house. Without any windows or doors, the house, or microbe, is exposed to a thunderstorm-like immune system that can tear it apart. The peptides mimic this by penetrating and destroying the microbe’s membrane: its cellular shield to the immune system.

Alligators, lizards, and even some plants have these infection-fighting antimicrobial peptides. Currently, Dr. Bishop is identifying and categorizing new peptides in species that demonstrate immunity to infection and investigating how these peptides work with the immune system. Using bioinformatics, the science of analyzing biological data, he has identified forty-five possible antimicrobial peptides in the American alligator alone. Of these, eight have been chosen for further study. He is excited about his line of research and says, ”We’ve seen a new side to the complexity of immunity and it is fascinating.” The next step for his research is to understand how these peptides would behave and function in the human body and determine whether or not they can help treat human infection.

Dr. Bishop’s work towards fully understanding the characteristics of the American alligator’s antimicrobial peptides is just the first step towards a healthier future. Only time will tell if “alligator pie” holds the key to treating infection.