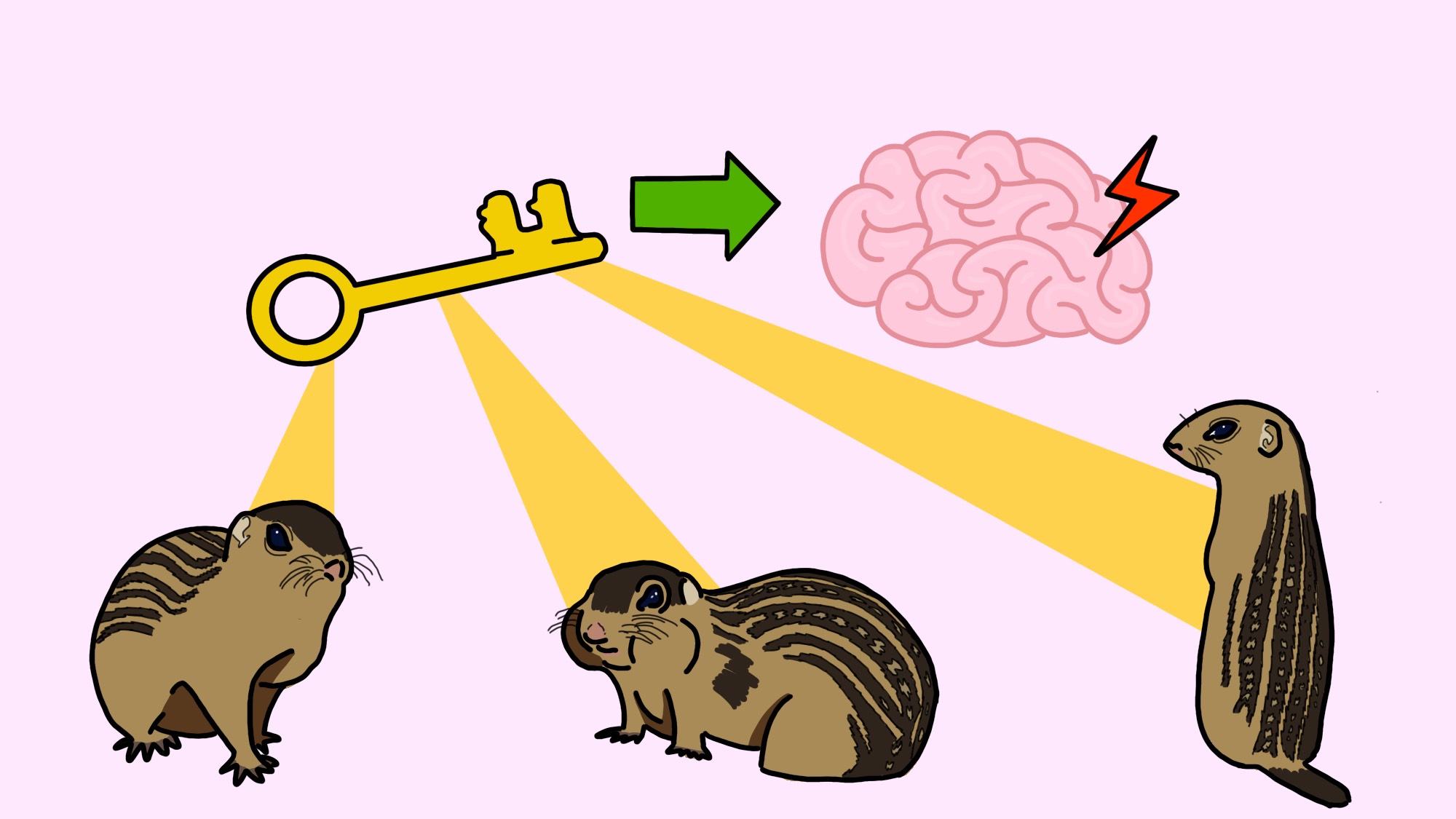 WHOOSH! A powerful wind sweeps across the prairie, engulfing all flora and fauna lying in its path. Yet, underneath the prairie soil, sleeping peacefully in its cozy winter burrow is the 13-lined ground squirrel (aka Ictidomys tridecemlineatus).

The 13-lined ground squirrel hibernates every winter, passing into a deep, dormant state to avoid the harsh freezing climate. The squirrel’s heart rate, metabolism, and body temperature decrease considerably, slowing down blood flow to its brain. Yet, despite the relative lack of oxygen and nutrients caused by reduced cerebral blood flow, the 13-lined ground squirrel survives. In fact, it ranks among the “most brain hypoperfusion-tolerant mammals known,” boasting remarkable tolerance to reduced blood flow to the brain.

Juxtaposed with the resilience of the 13-lined ground squirrel brain is the fragility of the human brain. Globally, over 7.6 million people suffer from ischemic strokes each year. These strokes occur when blood vessels in the brain become obstructed. Reduced blood flow during ischemic stroke cuts off much-needed oxygen and glucose (a type of sugar), resulting in neuronal/glial cell death.

Dr. John M. Hallenbeck is an emeritus senior investigator at the National Institutes of Health (NIH) and the former director of the Stroke Branch at the National Institute of Neurological Disorders and Stroke (NINDS). He was a pioneer in squirrel-stroke research. He and his team discovered the ischemic resilience of the 13-lined ground squirrel is driven in large part by a post-translational cellular process called SUMOylation. During SUMOylation, Small Ubiquitin-like Modifier (SUMO) proteins bind to other proteins and in so doing modify their activity, location, and/or stress responses. Dr. Hallenbeck observed that SUMOylation dramatically increased in 13-lined ground squirrels during hibernation and this allowed the squirrels to endure extreme conditions while hibernating.

Dr. Joshua D. Bernstock, a neurosurgeon-scientist, collaborated with Dr. Hallenbeck to study the ischemic tolerance of the 13-lined ground squirrel.

“These squirrels are having bouts of ischemia (decreased blood flow) — in the context of hibernation — that are more extreme than any human stroke, yet have no cellular pathology, no behavioral deficits,” explained Dr. Bernstock.

While the team has pursued a variety of modalities in an effort to therapeutically engage SUMOylation, a recent study by Drs. Bernstock and Hallenbeck investigated whether classes of small molecules could be identified that could artificially increase SUMOylation levels in pertinent murine models. By artificially increasing SUMOylation levels using small molecule drugs, the researchers hoped to emulate the 13-lined ground squirrel and achieve greater resilience against reduced blood flow. In doing so, they hoped to ultimately develop a compound that could be used in clinical settings. They examined 4,096 small molecules to identify compounds that could boost SUMOylation. Compounds that inhibit an anti-SUMOylation protein called SUMO-specific isopeptidase (SENP2) were targeted. Essentially, by blocking SENP2, the researchers hoped to suppress an inhibitor of SUMOylation and thereby increase global SUMOylation levels.

One of the techniques Drs. Bernstock and Hallenbeck utilized to narrow down the over 4,000 candidate compounds was cellular thermal shift assay (CETSA). The research team used CETSA to evaluate how well each small molecule compound engaged with the SENP2 protein. Eventually, after a lengthy screening process, eight compounds were identified as potential inhibitors of SENP2 activity. These eight compounds were then co-cultured with rat neuronal cells to assess whether they could boost SUMOylation levels. Four compounds: ebselen, 6-thioguanine, isoprenaline hydrochloride and ethyl protocatechuate increased SUMOylation levels.

Following the success of their study, the researchers now aim to investigate if boosting SUMOylation levels with ebselen can actually protect the brains of animal models during stroke-like conditions. By utilizing small molecule drugs to treat animal models of stroke, the same compounds could potentially be applied to treat ischemic stroke in humans.

Dr. Bernstock, the lead author of this study, remarked that “nature, through iterative evolution, has solved what’s one of the most complex problems in human biology and pathophysiology.”

“Ultimately, a lot of what scientists are trying to do have been solved in some form by nature,” explained Dr. Bernstock, “If we understand what nature has been able to do, we can come up with profound insights.”

Amy Puffenberger holds a Bachelor of Science in Film and Video Production (2005) from Grand Valley State University and a Master of Arts Management (2010) from Carnegie Mellon University. While completing her master’s degree, Amy worked with both Pittsburgh Filmmakers and the Arts Education Collaborative, and later served as the Manager of Educational Outreach at WQED Multimedia, the PBS-affiliate in Pittsburgh, PA and the nation’s first community-supported public broadcaster.

Joshua D. Bernstock, M.D., Ph.D. is a neurosurgeon-scientist completing his neurosurgery residency at Brigham and Women’s Hospital. He is also conducting research as a visiting scientist at the Massachusetts Institute of Technology.

Minhong is a junior attending an international school in South Korea. Minhong’s love for biomedical science and writing inspired him to join cSw as a writer. In his free time, Minhong enjoys playing and coaching soccer, listening to Taylor Swift, and “chilling out.”