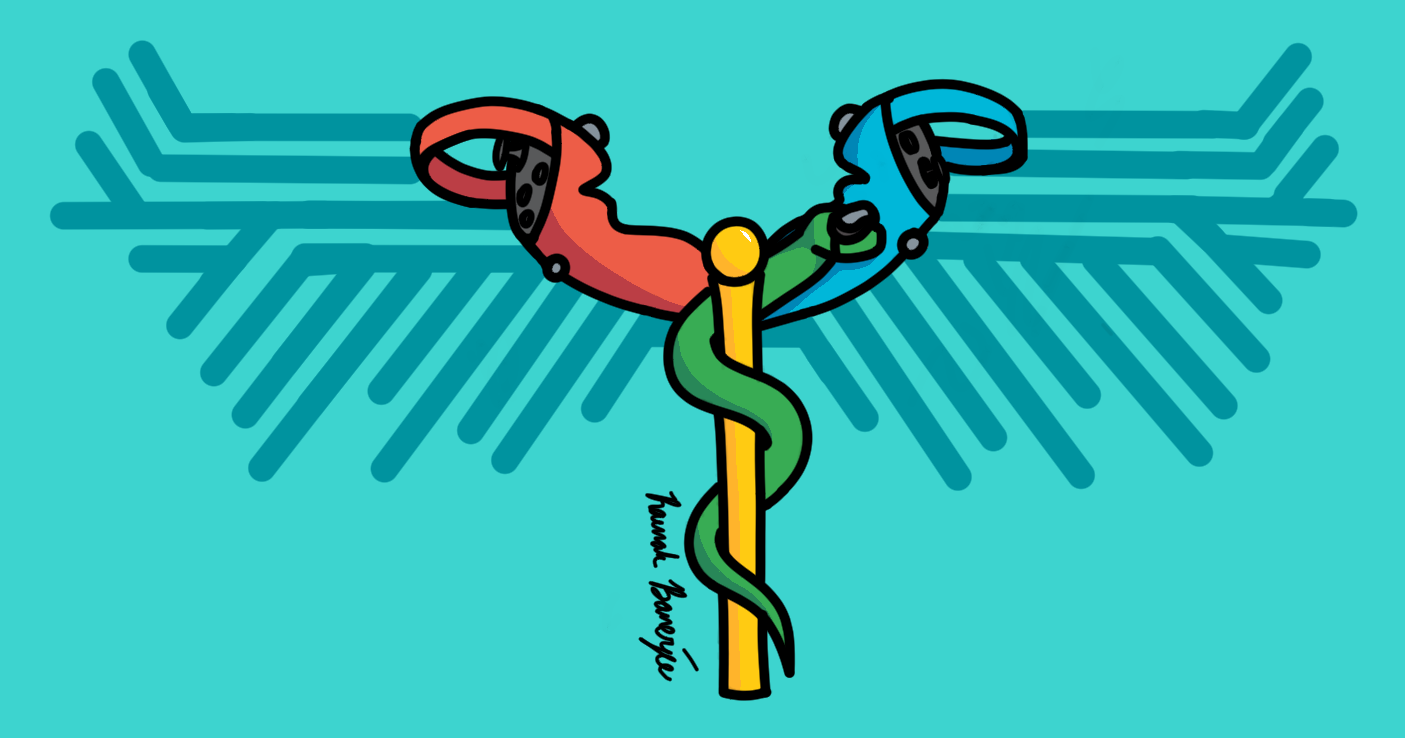 “In a matter of six weeks, you couldn’t even tell he had a stroke.”

This is what Arik Yates, a physical therapist assistant, said about a chronic stroke patient who had tried virtual reality therapy for the first time. The aforementioned stroke patient was a huge action movie buff, so Yates introduced him to the virtual reality (VR) video game Superhot VR, which is similar to the movie Die Hard.

Yates had an unconventional path into his field of work, originally pursuing the career of a video game journalist. Then, he was involved in a car accident, became interested in physical therapy and decided to pursue the field as an occupation. As a former video games enthusiast – which Yates likens to an addiction – he “saw games as [his] friend more than people.” He started working at a neurological recovery company that used VR. Engrossed by VR, as he says, “I was taken away from my normal [life] — being debilitated in some way — and I was kind of this hero or protagonist of this interesting story.”

As a huge proponent and user of VR to benefit his physical health, he was able to lose eighteen pounds with the fitness rhythm game Beat Saber. At higher difficulty levels, the game involves intensive workouts where players slash through blocks with lightsaber-like swords timed to music. Once Yates started helping patients use VR, he was amazed by how “something really mundane turns into a really incredible, neuroplastic event in their brain.”

During a stroke, the brain’s supply of oxygen and nutrients through arteries is interrupted suddenly. This can have long-lasting effects on a victim’s ability to speak and/or move large portions of their body, causing paralysis in the worst cases. Typically, patients who have suffered strokes and other neurological trauma undergo intensive physical therapy in order to try and reestablish their mobility. This is usually delivered with the help of a therapist. Throughout the COVID-19 pandemic, therapy has often been provided through video conferencing or prerecorded instruction videos.

While traditional physical therapy can undoubtedly be effective for those who have suffered from a stroke or spinal cord injury, it is oftentimes dull and repetitive. Instructions can be hard to grasp for patients both young and old and therapy may be especially painful for burn victims. However, there may be a way to ease their pain, increase their enjoyment and help transition them into the lives they once knew, via VR.

Researchers have studied the possible benefits of using virtual reality peripherals for injury victims and patients of other movement-affecting conditions. A study of Parkinson’s patients found that VR therapy participants had a greater improvement in gait and balance when compared to those who participated in traditional physical therapy. A separate study found that burn victims spent less time thinking about their pain and even physically felt less pain when using VR as an escape mechanism. At a Shriners Hospital for Children in Texas, a VR software application titled “SnowWorld” transports patients into a frigid winter wonderland where they can be pummeled by snowballs and catch a ride on an Arctic glacier. The VR program was found to decrease pain-related activity in the brain by fifty percent.

Neuro Rehab VR, also located in Texas, is the virtual reality company where Yates currently works. Their experts found that in the case of conditions ranging from strokes to post-concussive syndrome, VR powered physical therapy put patients on a quick path to recovery. In one case, a seventy-year-old stroke victim simulated tasks such as getting groceries in VR. Her ability to hold objects and keep her balance was found to have improved at an expedited rate. Her balance was measured by the BERG Balance Scale. While regular physical therapy was also used, the goals set by the patient were achieved more quickly through the inclusion of VR exercises.

In addition to being able to convey instructions in a more intuitive way compared to videos or written directions, VR also has an aura of novelty around it. Adventurous younger patients aren’t the only ones who try it. Even older patients are open to testing out VR.

VR physical therapy was also found to improve the mental health of those who have suffered from severe, mobility-impacting injuries. Many of these patients have to go through emotionally difficult changes, such as not being able to do many of the things that they once were able to do. Guided meditation in ambient virtual spaces can reduce stress levels. In addition, Yates states there is work being done to help patients of mental health disorders such as PTSD and phobias, through more immersive exposure therapy and embodied situations.

Furthermore, VR devices can also provide detailed statistics and diagnostic data similar to wearable fitness technology. This makes it easier for therapists to tweak routines over time as they monitor the recovery of their patients.

While there are clearly many benefits to VR therapy, it isn’t a one-size-fits-all approach. If used incorrectly, it can actually cause harm to the user. For instance, due to the immersive nature of VR, it can be dangerous for cardiovascular patients to use, because of a decreased pain awareness. Thus, they may overexert themselves without ever realizing that they are doing such. So, physicians need to be involved in the rehabilitation process.

Additionally, there are issues of potential nausea, “VR legs”, as VR users call the experience of one’s mind not being used to virtual locomotion, as well as vision complications due to people’s varying interpupillary distance (the distance between one’s eyes). When asked when he would expect VR and similar technologies to be used in all forms of healthcare, Yates suggests five years.

Given the rapid advancement of VR and motion tracking technologies, virtual reality is becoming valuable outside the world of entertainment. Many areas of medicine stand to improve greatly if VR technology is implemented well. VR will help slash the impacts of countless maladies.

Brandon Levy is a Science Communications Editor for the Intramural Research Program (IRP) at the National Institutes of Health (NIH), where he works to increase the IRP’s public profile, inform the public about IRP research, and attract scientists and students to work in IRP labs. He particularly enjoys writing about the cutting-edge research performed at NIH, but he also produces videos and content for social media.

Arik Yates is a physical therapist assistant at Neuro Rehab VR. He pursues knowledge of the utilization of virtual and augmented reality for physical therapy, as well as acute and orthopedic rehabilitation.

Arca goes to High Technology High School in New Jersey. He wrote his second article for cSw this year, after writing a story in 2020 about wearables being used in tandem with the IoT (Internet of Things) to help smokers quit their addiction. He also ran the official cSw Twitter profile from 2020 to 2022 as a social media coordinator. Arca has a technology and pop culture blog that has been viewed over 300 thousand times which he started 8 years ago. Among the things he enjoys in his free time are reading about the latest trends in technology, writing and gaming.