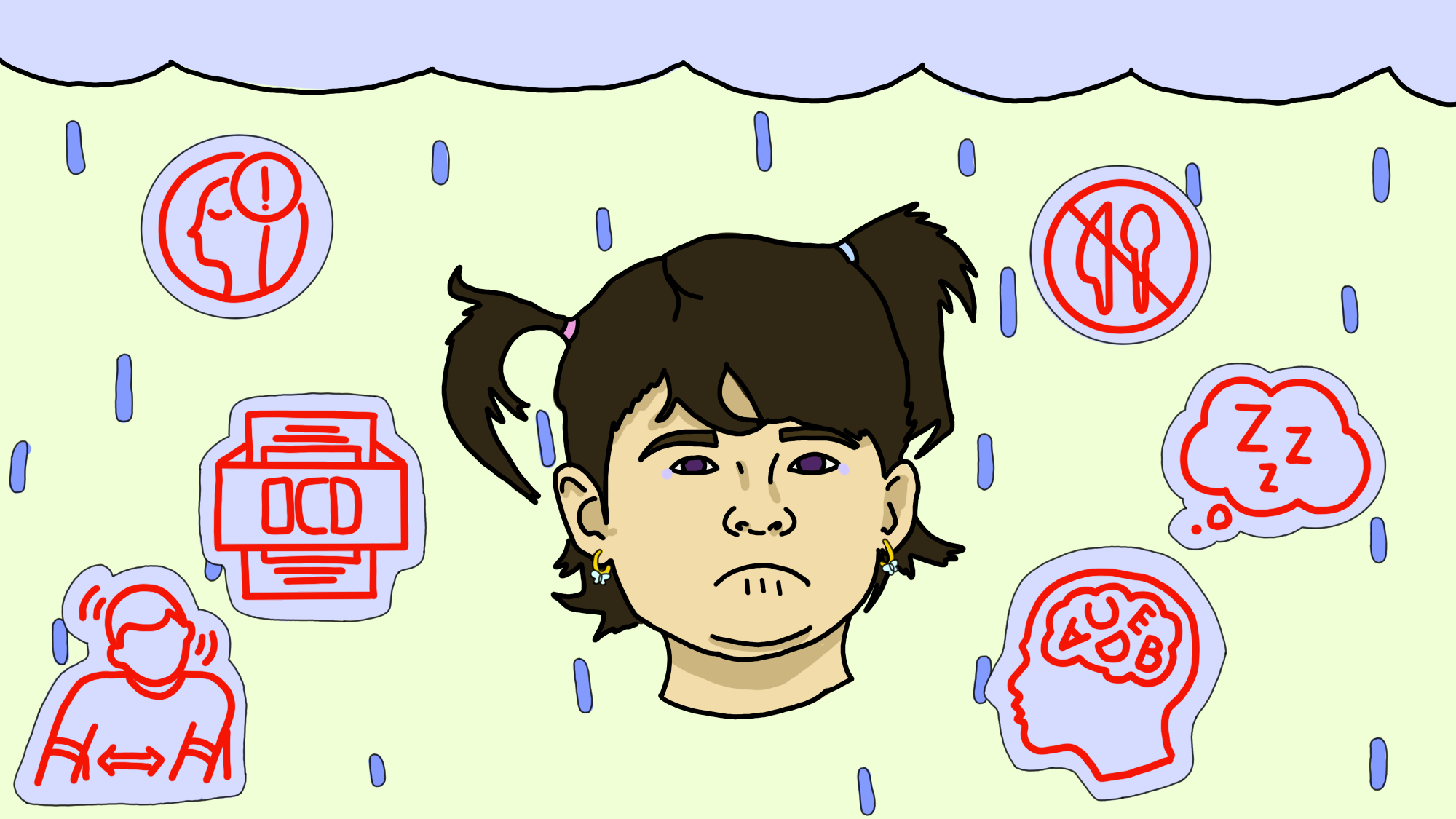 Imagine you wake up one morning with a tickle in your throat and the dull headache of a seasonal cold throbbing behind your eyes. You go to school, thinking it’s just a simple illness and that you can shrug it off. The constant anxiety over your sloppy handwriting has been blurred with the regular stress of high school and the vicious erasing of your homework because you wrote a single letter wrong is just a normal frustration from the workload. Except the headache won’t go away and the anxiety worsens. Suddenly your handwriting gets so bad you can’t answer the teacher when she asks what you wrote. Then you’re hearing voices and waking up screaming in the middle of the night.

You’re taken to a therapist who diagnoses you with obsessive compulsive disorder and generalized anxiety disorder. But the next night you find yourself in the street, screaming because a man is chasing you. Nobody else can see the man. You feel the control over yourself slipping. You can’t stop the sudden explosions of anger or the excessive scratching at your own skin until you bleed. Trapped. Terrified. And nobody can tell you what is wrong.

Pediatric Acute Neuropsychiatric Syndrome (aka PANS) is one of the many rare diseases that leave even doctors at a loss for words. PANS is an illness that provokes an abnormal autoimmune response in the brain following a mild infection of the body, including the common cold. Early identification of this disease is flagged by the rapid onset of obsessive-compulsive disorder. Unfortunately, a diagnosis can only be made by tediously ruling out other possible health issues.

The unpredictability of this disease comes from its effect on the brain. PANS redirects the body’s immune response towards a part of the brain known as the basal ganglia. When swollen, basic functions such as speaking are greatly impacted.

Dr. Beth Solomon, a private speech pathologist who specializes in motor recovery, helps many PANS patients manage symptoms such as short-term memory loss, speech impediments, decreased oral motor function and most of all, the inability to swallow solids or liquids. “Swallowing is a very important physiological function, and with PANS patients initially, there are many that struggle with this.”

PANS was only recently discovered in the 1980s. The unfamiliarity with this disease and its long-lasting effects is a major reason for an ongoing controversy over whether it is real or not. This sentiment not only prohibits doctors from providing suitable treatment, but it also causes many misdiagnoses, leaving PANS patients stuck in the psychiatric ward or worse.

When properly acknowledged, PANS patients are treated with different forms of immunotherapy to tackle the brunt of the disease. Then, they are prescribed psychiatric medications and antibiotics to manage the remaining symptoms. Treatment plans fluctuate with the highs and lows of this disease and will often be paused during a remission of symptoms, only for the symptoms to return in a couple of weeks. In other cases, patients may be left with ongoing problems that require continuous treatment.

Dr. Solomon also believes that “if there was more awareness in the field of PANS, there would be a much greater understanding of what is causing these deficits.”

Acknowledging the reality of PANS puts us one step closer to freedom for children still suffering from the unsolved mystery.

Carol Haggans is a Scientific and Health Communications Consultant with the Office of Dietary Supplements (ODS) at the National Institutes of Health.

Dr. Beth Solomon is a medical speech pathologist for the National Institutes of Health. She also works privately with patients to improve impaired oral motor functions.

Sophia Fritsch attends Thomas S. Wootton High School in Maryland. This is Sophia’s first year participating in the Curious Science Writers program and she is thrilled to be a part of such a unique and constructive group. She looks forward to developing her scientific literacy skills and spreading awareness on some of the misconstrued topics in today’s media. Aside from science and writing, Sophia enjoys being outdoors and traveling to new places. In her downtime she enjoys a good book.