Many Americans might assume COVID-19 is the only active pandemic at this time. However, they would be wrong. Tuberculosis (TB) kills approximately one person every 21 seconds worldwide.

Imagine your doctor tells you you’re dying due to a TB infection you picked up 50 years ago as a child.

Why and how is that even possible? Just like the flu, contagious TB-causing bacteria (M. tuberculosis) is usually spread through tiny droplets from an infected person’s cough or sneeze in the air. Once TB bacilli are inhaled and a person becomes infected, one of two things can happen:

The person’s immune system is too weak to stop the bacteria from growing. The bacteria begin to multiply in the body and cause TB. Such individuals are symptomatic and can spread the disease to others.

The person’s immune system fights the bacteria and as a result, they become dormant or inactive, but they remain alive in the body and can activate later. Such asymptomatic carriers are said to have developed a latent TB infection. People with latent TB are not contagious and therefore, can’t spread the disease.

It is still unclear as to what factors drive these two outcomes.

While some people with latent TB infections never develop the disease, 5 to 10 percent of carriers will become sick in their lifetimes. This is especially possible when the carrier’s immune system is already compromised due to other illnesses like HIV/AIDS.

Patients may be encouraged to learn a potential solution to this disease could come in the form of obscure sea sponges.

Dr. Kyle Rohde from the Immunity and Pathogenesis Division of the Burnett School of Biomedical Sciences at the University of Central Florida has explored the role of sea sponges in treating TB. While the disease can affect any part of the body, it spreads slowly in the lungs in most cases, forming hard, cheese-like masses called nodules (granulomas). These nodules break down the respiratory tissues and form cavities within the lungs, making it hard to breathe.

TB is very difficult to treat for a number of reasons. Tuberculosis bacteria have a thick cell wall with a waxy coating composed of mycolic acids (long fatty acids) that drugs have difficulty penetrating. The bacteria also produce proteins that make them resistant to therapy. Currently, six to nine month treatment plans are used, in which four to six different drugs are administered per day with toxic side effects. This regimen, in fact, contributes significantly to the spread of the disease since patients often discontinue treatment mid-way, after the initial symptoms subside. This allows TB bacteria resistant to the antibiotics to grow stronger and render treatment options ineffective. Drug resistant strains emerge due to random mutations. Once a drug-resistant strain has developed, it can be transmitted to other individuals, thus making treatment even more dangerous and difficult. 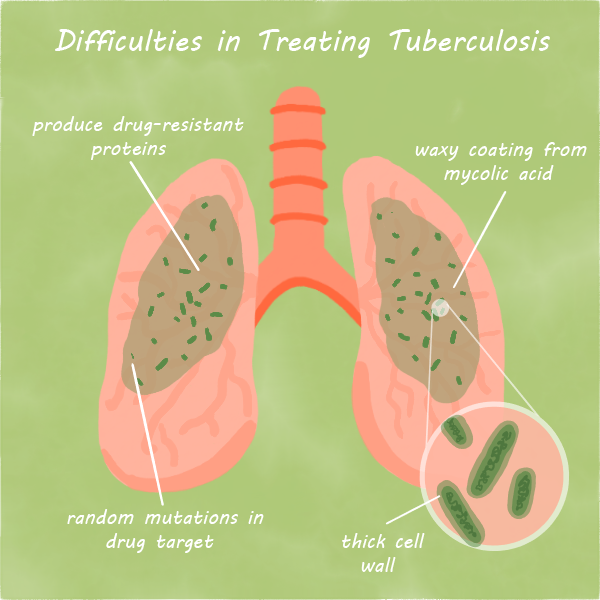 Due to their unique marine environment, organisms like sea sponges have developed multiple potent antimicrobial defenses that inhibit the growth of TB with no toxic side-effects. Researchers have successfully isolated the compounds from sea sponges that prevent the growth of M. tuberculosis by inhibiting cell wall synthesis and targeting their energy metabolism.

The fight against TB bacteria is much like storming a fortress. All they need to do is create a tiny opening to successfully invade and overtake the fortress. Researchers are trying to isolate specific compounds from sea sponges that could effectively help “crack open” the thick cell wall of M. tuberculosis in order to kill it.

If researchers successfully isolate and obtain chemical compounds that can kill both the replicating and dormant forms of TB bacteria, Dr. Rohde strongly believes efforts to eradicate TB will get a major boost. “Most of the drugs we have only kill bacteria that are trying to replicate. We need drugs that can kill those dormant ones [too],” he says.

Dr. Rohde’s team is curious to learn precisely how compounds from sea sponges kill dormant tuberculosis bacteria. This new information could be used to develop new therapeutics. Once these compounds are purified, further isolated, studied and found effective, researchers plan to synthesize and modify them, if needed, boosting their properties in the laboratory to improve their clinical efficiency.

Researchers are working tirelessly to solve the puzzle of M. tuberculosis. However, as Dr. Rohde points out, various TB strains can quickly develop drug resistance. This means the road to get to effective solutions and therapies will be long and complicated.

Content expert
Dr. Kyle Rohde is an Associate Professor at the Burnett School of Biomedical Sciences, at the University of Central Florida, where he manages an independent biomedical research lab focusing on Mycobacterium tuberculosis. He is engaged in grant-writing, teaching, and training graduate students and postdoctoral fellows. Dr. Rohde received his Ph.D. in microbiology/immunology from the University of Oklahoma Health Sciences Center and worked as a Senior Research Associate at Cornell University. Dr. Rohde’s lab has successfully conducted the largest marine natural product screening on TB and the only one that focused on dormant bacteria.

This article was written by Adwaith Hariharan. Adwaith and the cSw student editing team would like to thank Gabrielle Corradino for serving as a mentor on this story. Gabrielle Corradino, Ph.D., is the Knauss Marine Policy Fellow at the National Oceanic and Atmospheric Administration. She is also a National Geographic Explorer, a group of informed, curious, and capable individuals identified by the National Geographic Society, who are committed to making the world a better place. As always, before leaving a response to this article please view our Rules of Conduct. Thanks! -cSw Editorial Team.