“We’re sorry to inform you, but you have hepatitis C.” In just ten short words, patient Paula Francis received a blow that changed her life forever. This was the last diagnosis Francis expected when she went to the doctor with what she thought was the flu. Little did the stay-at-home mom know that she had been living with this debilitating disease for years. Like many other patients with the hepatitis C virus, or HCV, Francis had acquired the disease through the use of unsterilized needles. This combined with the apparent lack of available treatments made Paula, like many HCV patients, feel lost.

A Lack of Options

Although there have been recent advances in antiviral drugs to help treat HCV, these drugs are difficult to obtain and exceedingly expensive. Many of these drugs also have negative side effects. In response to this lack of options for patients like Paula, scientists like Dr. Alexander William Tarr of the University of Nottingham are on the lookout for a more accessible and cost-effective way to treat HCV.

Tarr and his colleagues decided to investigate alpaca nanobodies because of their suppressive effect on HCV. These nanobodies, or small protein fragments that identify pathogens, can easily attach to and inhibit the hepatitis C virus, unlike other common immune system proteins. Alpaca nanobodies can also be molded and mass produced easily, resulting in low-cost drug production. With this in mind, the researchers tested four different types of alpaca nanobodies in order to determine which one was the most effective in inhibiting the hepatitis C virus. 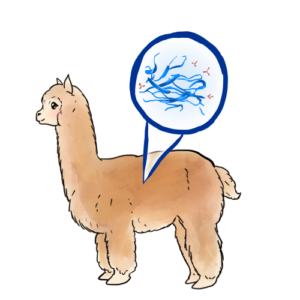 The most successful alpaca nanobody, D03, was able to inhibit two different strains of HCV and function in six unique genotypes of HCV, unlike current antiviral drugs that only inhibit one HCV genotype. After a closer look at the crystal structure of nanobody D03, scientists also found that it uniquely folds to prevent the cell-to-cell transmission of HCV. This means that a drug made from the D03 nanobody could be the first drug able to stop the spread of HCV throughout the body.

In a follow-up experiment, researchers also found that alpaca antibodies not only inhibit HCV, but also many types of retroviruses, or viruses that contain RNA instead of DNA. With Dr. Tarr’s research, this farm-animal fix gives hepatitis C patients like Paula and others who suffer from retroviral diseases new hope for effective and accessible treatment.

This article was written by Sonal Mahindroo. As always, before leaving a response to this article please view our Rules of Conduct. Thanks! -cSw Editorial Staff