From Insult to Injury: Pollution and the Brain

Home » Alzheimer's » From Insult to Injury: Pollution and the Brain

How polluted is the air you breathe? If you answered, “I don’t know,” you’re not alone. Dr. Anna Robuck, a pollution researcher at the University of Rhode Island Graduate School of Oceanography says “it [is] really crazy that I didn’t know about living in a polluted community until I started a chemistry Ph.D. on it. It shouldn’t require that much background knowledge to understand what you’re exposed to.” In fact, 90% of the U.S population is exposed to high levels of air pollution, whether it’s coming from a nearby highway, your leaf blower or your room’s air conditioner. Robuck calls these “environmental insults” because they inflict tremendous harm on our bodies.

This harm extends beyond the well-known cardiovascular and respiratory impacts such as strokes, acute heart failure and asthma. New research is showing a direct link between air pollution and central nervous system (CNS) diseases, such as autism, dementia and even reduced cognitive abilities.

Robuck has been researching how per- and polyfluoroalkyl substances (PFAS) – synthetic chemicals found in common household items – enter the ocean and spread throughout the food web.

“I was really surprised to find PFAS and other pollutants in every single tissue from seabirds that I looked at,” Robuck commented. Similarly, because of its small size, diesel exhaust (DE) can spread throughout internal organs, including the brain, through inhalation and circulation. The effect of this spread is profound as DE is a neurotoxin that alters the normal function of the CNS.

Scientists found that children growing up in Mexico City, which has very high levels of air pollution, performed poorly on cognitive tests in comparison to children from a more rural area. The study also showed that city children had elevated levels of DE in their brains. In addition, research has indicated a significant association between residential proximity to major roadways and autism spectrum disorder (ASD). One such study of early-life exposures in Shanghai found subjection to traffic-related air pollution increased the risk of developing ASD by 78%.

But how do chemicals from air pollution enter and affect our brains to begin with? When we inhale DE, the microscopic chemical bypasses the blood-brain barrier instead of being filtered out of the blood through the lungs. Once the chemicals get to the brain, they primarily affect the CNS through oxidative stress and neuroinflammation. 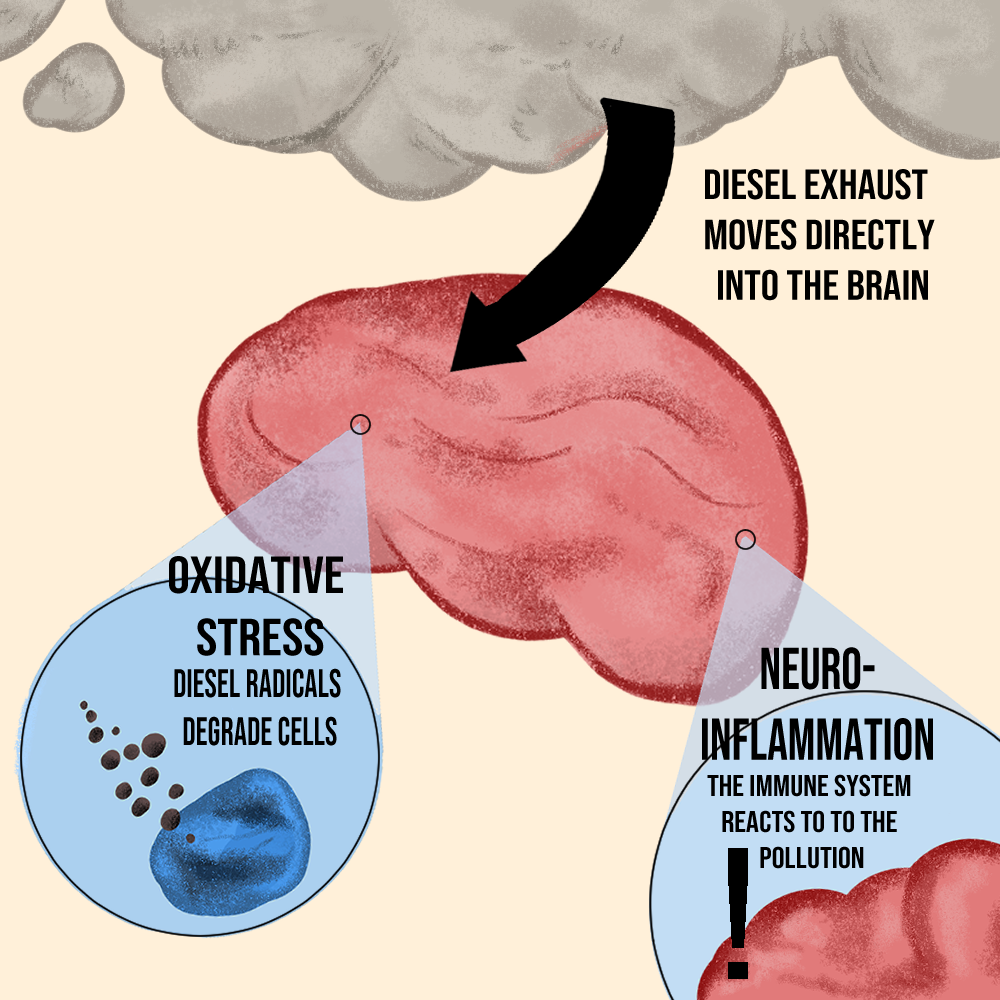 Oxidative stress is caused by an imbalance in the body between highly reactive oxygen-containing molecules called radicals, found in air pollution, and antioxidants that can stabilize these radicals. It’s like having several rowdy prisoners and only a few guards to pacify them. Eventually, there will be a prison break that will affect the welfare of the community. Similarly, in the body, this imbalance causes several neurodegenerative diseases such as Parkinson’s and Alzheimer’s.

Neuroinflammation, on the other hand, is the result of the brain’s immune system reacting to “environmental insults.” In this case, the disruption being DE. This can lead to tissue damage and the development of CNS diseases such as ASD, depression, Alzheimer’s and Parkinson’s.

Symptoms of oxidative stress and neuroinflammation were found in children and young adults from the aforementioned studies. This suggests air pollution has an impact on the CNS throughout many stages of life.

The relationship between air pollution and CNS health is confirmed by several animal studies that showed mice exhibiting similar signs of neuroinflammation, oxidative stress and reduced cognitive ability as a result of DE exposure.

These risks become even more prevalent later in life when other factors, such as genetic predisposition, combined with long-term exposure to air pollution, contribute to the development of neurodegenerative diseases.

Children born to women who have been exposed to air pollution could also be negatively affected. Studies of mice exposed to DE in utero, showed similar responses as adult mice from the previous studies. The mice exposed prior to birth also demonstrated a predisposition to weight gain, insulin resistance, ASD, depression and markers of neuroinflammation.

As air pollution levels continue to increase, scientists are concerned we are going to see these adverse neurological effects earlier in people’s lives. There are many things we can do now to prevent this. Several researchers think the perfect retort to these “environmental insults” is precautionary regulations that will reduce the amount of DE and other neurotoxins in our air and prevent new harmful chemicals like PFASs from being introduced to our environment. Some suggestions by scientists include stringent fuel standards to promote the production of cleaner fuels and car engine requirements to ensure newer vehicles produce fewer emissions. As Anna Robuck said, “[it is] so much harder to clean up things out of our bodies and our environment once they’re already there.”

Anna Ruth Robuck is a researcher at the University of Rhode Island Graduate School of Oceanography. She studies PFAS and other environmental pollutants in coastal environments and organisms.

Costa, Lucio G., et al. “Neurotoxicants Are in the Air: Convergence of Human, Animal, and In Vitro Studies on the Effects of Air Pollution on the Brain.” BioMed Research International, Hindawi, 12 Jan. 2014,   www.hindawi.com/journals/bmri/2014/736385/.

This article was written by Karishma Goswami. Karishma and the cSw student editing team would like to thank Monica Cox for serving as a mentor on this story.  Monica the communications director for Rhode Island Sea Grant and the editor of the twice-yearly magazine 41°N that is produced in partnership with the Coastal Institute at the University of Rhode Island. As always, before leaving a response to this article please view our Rules of Conduct. Thanks! -cSw Editorial Team.

Karishma Goswami is a Junior at Monta Vista High School in California.