Going From “iSmoke” to No Smoking With Wearables

Home » Addiction » Going From “iSmoke” to No Smoking With Wearables

A major health issue currently threatens lives around the globe. We’re not referring to COVID-19, but rather, smoking.

According to the World Health Organization, smoking kills 8 million people each year and those who smoke cigarettes die a decade earlier than those who don’t. A single lighted cigarette contains 7,000 chemicals, 69 of which are known to cause cancer. The U.S. Centers for Disease Control and Prevention estimates the total economic cost of smoking is a whopping $300 billion a year, including $170 billion for direct medical care and $156 billion of lost productivity.

It’s no secret that smoking is harmful. That point is driven home in advertisements and school curriculums. So why does the world still have an estimated 1.3 billion tobacco users? This can be explained in part by the presence of the addictive chemical nicotine. Smoking can become a life-ruining habit that is extremely difficult to break for many. COVID-19 might well have increased the threat. The pandemic has reduced the likelihood of people attending cessation clinics. And because it has taken many employees out of the smoke-free workplace, smokers will be more likely to relapse.

Past technology-based solutions to smoking addiction include online self-improvement programs that rely on the user to report their own behavior in order to come up with a quitting plan. In recent years, the use of mobile technologies (mHealth technologies) for tobacco cessation has gained popularity. These include Text2Quit and the National Cancer Institutes’ SmokeFree Text with tailored instructions and motivational messages. These programs have demonstrated positive effects in some populations. However, their functionality is limited because text messaging is unable to automatically identify instances when assistance to resisting cravings is needed or when relapses occur.

Through the power of health-tracking sensors and wearable monitors, people may no longer have to rely on their own memory and self-will in order to record their behavior. Through funding from the National Cancer Institute, Dr. Ming-Chun Huang, an Electrical, Computer and Systems Engineering Professor at Case Western Reserve University is working on custom-created, wearable arm monitors in conjunction with an anti-smoking Android app to help users quit smoking. Smoking is detected automatically and accurately in real-time. The wearable sensors recognize when a user is completing the sequence of motions recognized by a neural network as being affiliated with smoking. Mobile alerts are sent and progress is recorded in the app. The smartphone app also serves as a virtual coach and sends videos to the user at personalized times. It even gives them just-in-time assessment and feedback by providing immediate quit reminders to curtail relapses and avoid potential triggers.

Phones, unlike doctors, are almost always with a person. They can communicate with a wearable and send information to the user, family members or a doctor. They can also receive videos, which visually emphasize the reasons not to smoke. Since many people smoke first thing in the morning, the videos are sent when the user wakes up.

When a user sets up the app for the first time, they can create plans to reduce the number of cigarettes they smoke daily. They can also choose to quit smoking altogether. Personalized plans are generated by answering multiple questions. Two times a week, a smoker is asked to fill out a survey to measure their progress. This includes questions that gauge their determination to quit, what activities cause them to crave smoking and more. The app can adjust the messages and videos it sends accordingly to help prevent the user from relapsing.

Participants wear two armbands right above each wrist. This is because some people alternate arms or use both arms while smoking. Therefore, using two bands helps record the motion of both arms at once. For instance, one arm may be used to hold up a cigarette and another to light it or vice-versa.

Certain common motion sequences like answering a phone or drinking a glass of water are similar to smoking a cigarette. The algorithm was trained over the course of multiple studies to be able to accurately recognize and differentiate these other harmless motions from smoking. In the end, the two armbands were able to identify smoking with 98% accuracy, as opposed to the 72% accuracy of wearing just one. One armband would be able to catch the act of smoking only in its later phases, unlike two, which would recognize the motion earlier. This may be seen as an issue to some, according to Huang, since some people aren’t willing to regularly charge, let alone own and wear, two armbands at once. However, as more information is collected, the accuracy of wearing just one armband will likely increase. 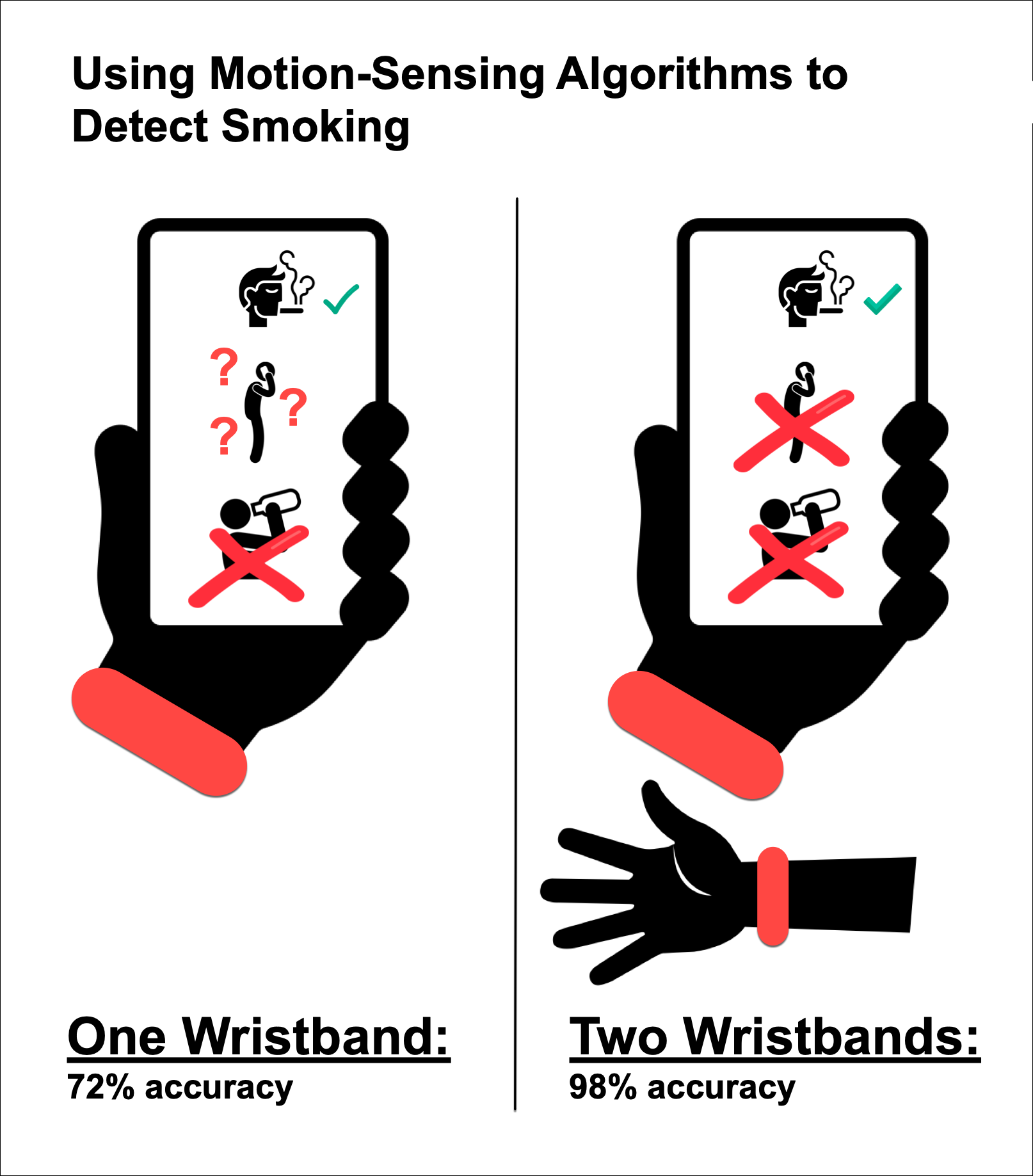 Huang compares the A.I. deep learning network’s motion-sensing ability to recognize smoking to teaching a toddler in a supervised manner. Humans are born automatically “knowing certain rules” about the world, he says, but machines need to be given a set of rules to understand or learn our world from (sensor) data. He says a 3-year-old child can be shown several pictures and objects (data) over and over again and be told “this picture is a door, this picture is our front door (labels).” Eventually the child can recognize what a door looks like by recognizing the common patterns out of the pictures and objects. Similarly, the algorithm behind this program would be fed lots of examples of a complete smoking motion, including taking a cigarette out, lighting it and taking a breath. It would also be shown lots of examples of non-smoking actions, so the machine can differentiate smoking gestures from other similar motions.

The app will also feature mindfulness exercises that smokers can complete whenever they crave cigarettes. The method used is called R.A.I.N., which stands for its multiple steps: Recognition, Acceptance Investigation and lastly Non-identification, of one’s emotions.

When asked about future features, Huang mentions a social support forum where users could share their experiences with others who are trying to quit. He also hopes to introduce GPS integration to detect if a user has entered a location that could possibly trigger the compulsion to smoke. One such location is a coffee shop, since the taste of a cup of coffee is a common trigger. At a smoke shop, users could be reminded of their quitting goals through the app. In addition, geofencing technology could be used to pair precise GPS locations with local map data of the locations and boundaries of select shops and businesses.

Rewards and achievements will be built-in to give the user a sense of accomplishment and satisfaction as they make progress in their journey to quit smoking. Huang says the app’s creators could work together with companies to do cross-promotional discounts for the achievement of certain goals. Also, a leaderboard and social media sharing system, akin to Fitbit’s step milestones system, could allow the user to track their journey to quitting smoking alongside another friend or family member.

Punishments could also be implemented for those who fail to meet their goals or relapse after a long period of improvement. Huang explained that users could use automatic screen-time limitations for their device, without interfering with calling and texting

On the issue of privacy, Huang understands technically speaking, everything that the wearable device is doing can be seen as a breach of privacy. Centralizing privacy-sensitive data on one machine or in a data center may raise questions of data privacy, especially if a data warehouse is attacked by hackers. Huang says if people are concerned with sensor data privacy, his team “developed a distributed deep learning optimization system that keeps the private sensor data locally in phones, shares trained parameters across a network and builds a global consensus model collaboratively.” User data privacy is protected on two levels. First, local sensitive data does not need to be shared with other people and the user has full control of their sensitive data all the time. Second, only a small fraction of local model updates are selected for sharing, which further reduces the risk of information leaking. Once he explains this system to people, Huang says they feel much more comfortable.

Finally, when asked if a similar app could be used for any other medical condition, Huang states it could be helpful for tele-rehabilitation applications. Several exercises would have to be repeated daily, and since many people can’t visit a clinic frequently, this would greatly benefit stroke, Alzheimer’s and Parkinson’s patients.

Overall, this app has the potential to provide an effective, helpful and rigorous method for assisting smokers who want to quit. It also addresses almost all the problems with currently available technologies and programs. As wearable technology becomes more prevalent in the medical world, patients should have to rely less and less on their memories. In fact, the technology has already benefited one of the researchers developing the armbands.

“My student told me he quit smoking after he completed the whole project,” says Huang with a chuckle, calling it one of the bigger surprises of his research.

Ming-Chun Huang is an Associate Professor of Electrical, Computer and Systems Engineering at Case Western Reserve University. He is an investigator in the Advanced Platform Technology (APT) Center, a faculty associate of the Institute for Smart, Secure and Connected Systems (ISSACS), and a faculty steering committee member in the Center for Engineering Action.

What should I know about Fitbit challenges? help.fitbit.com. https://help.fitbit.com/articles/en_US/Help_article/1531.htm. Accessed August 30, 2020.

This article was written by Arca Baran. Arca and the cSw student editing team would like to thank Joe Kays for serving as a mentor on this story. Joe is the Director of Research Communications at the University of Florida. As always, before leaving a response to this article please view our Rules of Conduct. Thanks! -cSw Editorial Staff

Arca Baran is a sophomore from High Technology High School in New Jersey. Arca is interested in computer science, gaming, technology and writing. He has written a technology blog for over 6 years that has garnered over 210 thousand views.