A Clean Sweep: How Sleep Refreshes the Brain

Home » Alzheimer's » A Clean Sweep: How Sleep Refreshes the Brain

In 2018, one in ten people over the age of 65 suffered with Alzheimer’s, a particularly debilitating disease that devastates both patients and their families. Among the many factors contributing to this incurable disease is an all too common condition: a lack of good deep sleep.

During sleep, the body and brain go through many cycles where they refresh. One function, which happens only in deep sleep, is the processing of short-term memories into long term memories. Areas of the brain involved with deep sleep and memory degenerate naturally with age. But, if the brain becomes too dysfunctional and the natural rhythms are interrupted, the risk for Alzheimer’s significantly increases.

The glymphatic system operates naturally during sleep to clean out waste in the brain, much like an underground sewage system. Within this system, glial cells that congregate around neurons shrink during deep sleep, allowing cerebrospinal fluid to fill the brain and eliminate harmful substances. One such substance is beta-amyloid, a protein that damages neurons and hinders the brain’s ability to process memories.

Routine sleep deprivation inhibits this brain cleaning, leading to a buildup of toxins like beta-amyloid. “Being awake increases amyloid production. It goes up and down with wake and sleep,” says Dr. Bryce Mander, assistant professor at the University of California, Irvine and expert in sleep and aging. “It is a real balance because normally you build up this pathology, but then you clear it and take care of it. Anything that shifts you towards building up more and clearing less is when you increase your risk of Alzheimer’s.” 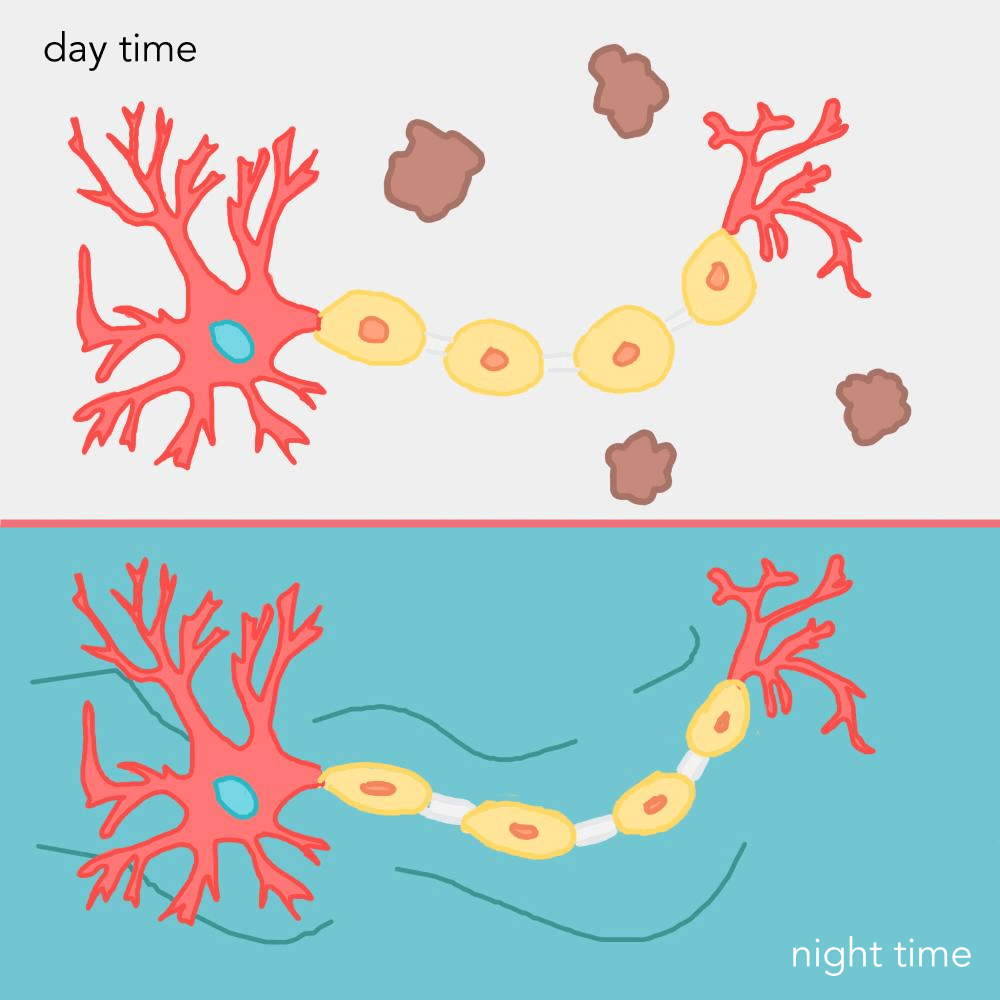 Consistently getting proper sleep does not completely prevent damage to the brain. The older the brain is, the more vulnerable it is to damage. In a study done for the Neuron, a team of scientists gave 20 young adults 120 pairs of words to memorize. The scientists monitored brain activity by recording two waves, slow and fast. They found that the subjects’ memorization of the words had a direct correlation with how well their slow and fast waves work together during deep sleep.

The experiment was repeated with adults in their 60s and 70s. Their brain waves were less synchronized, and they remembered fewer words than the younger group did. Atrophy, or degeneration as a consequence of aging, leads to less rhythm in the brain which is more serious in patients with Alzheimer’s.

It’s curious that one of the most prevalent factors contributing to Alzheimer’s does not require medical involvement. Maintaining a good daily schedule that makes room for a minimum of eight to nine hours of sleep may significantly reduce the risk of getting Alzheimer’s. There’s real power in getting a good night’s sleep.

Dr. Bryce Mander is currently an assistant professor in the Psychiatry & Human Behavior School of Medicine at the University of California, Irvine. After earning his Ph.D. in Neuroscience at Northwestern University, Dr. Mander completed his postdoctoral fellowship in the Department of Psychology at the University of California, Berkeley. Currently, his interest lies in understanding the role of sleep in cognitive functions and the health of the brain. One of his major works proved that brain activity during deep sleep has a direct correlation with loss of memory and was a breakthrough. It was published in Neuron, a highly influential and reliable journal in the field of neuroscience.

This article was written by Eeshan Khurana. As always, before leaving a response to this article please view our Rules of Conduct. Thanks! -cSw Editorial Staff

Eeshan Khurana is a rising senior at Biotechnology High School in Freehold, NJ. Eeshan is a writer for Curious Science Writers.