Look Over Here! Owls Teach Us About Brain Processing

Think back to all of those times you got distracted and lost track of the task at hand. You were solving a math problem when you heard snippets of music coming from next door or smelled the pizza your mom ordered for dinner. You looked back at the math problem and wondered, “Where was I?”

These situations are headaches to students and adults alike. Why do we focus on certain things and ignore others? Scientists have found the answer to this question with the help of our feathered friends: owls. With their sharp attention and hearing, owls have more noticeable brain cell activity than other animals. Taking advantage of this, Dr. Eric Knudsen and other scientists of Johns Hopkins University studied two sections of an owl brain — the forebrain and the midbrain — to help further our understanding of brain processing. To do this, they presented owls with sounds and images and recorded which brain cells processed the different sounds and images.

Owls, like humans, have two different methods of controlling attention called top-down control and bottom-up control that are directed by different parts of the brain. In humans, top-down control is when an individual generates the thought on his or her own. For example, if you were watching TV and remembered that your homework was due soon, your attention would shift from watching TV to finishing your homework. This happens in the forebrain. On the other hand, when your attention is caught by something in your environment, you use bottom-up control. An example of bottom-up control is when you notice people playing outside while you’re in math class. You may choose to focus on the view from the window rather than your teacher. This occurs in the midbrain. 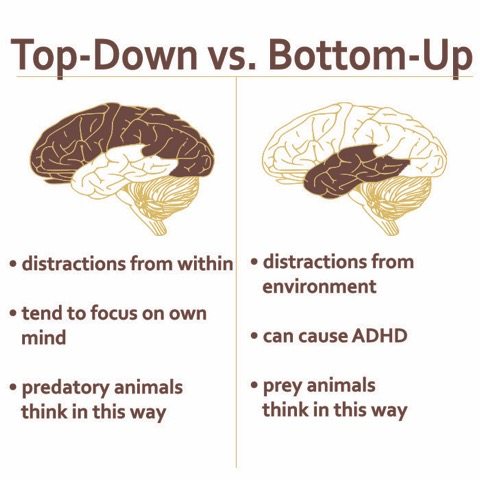 In Dr. Knudsen’s research, the relationship between these control methods and different parts of the brain was clarified. “If there’s something very important, [neurons in the midbrain] signal that and send it up to the forebrain. In the forebrain you have the network of what you’re actually thinking about.” says Dr. Knudsen. “We were looking at how the part of the brain that focuses on what’s going on around you interacts with the part of the brain that focuses on your goals and what you’re trying to do.”

Using Dr. Knudsen’s research and the insights gained from owl brains, these mental disorders involving top-down and bottom-up control and our own thought process can now be better understood.

This article was written by Katharine Marriott. As always, before leaving a response to this article please view our Rules of Conduct. Thanks! -cSw Editorial Staff

Who am I? I am Katharine Marriott a sophomore at Biotechnology High School, better known as Biotech. In my free time I enjoy doing anything on the water: sailing, swimming, paddle boarding, kayaking, and well you get the idea. I’m surprised that I’m not half fish. Working with children is another thing I enjoy doing. I love babysitting and volunteering at my town’s local summer recreation program. Well, what about science? To be completely honest I have always enjoyed science, but I never started to love it until I started going to Biotech. Science can get complicated, so I joined Curious Science Writers to break it down into simpler terms because it is important for the public to be informed on what is being discovered in the STEM world.