Inhale. Exhale. Inhale. Exhale. Fortunately, we don’t have to consciously command our bodies to perform this mindless activity every second of our lives. Our respiratory systems transport oxygen and carbon dioxide throughout our bodies 24 hours a day, seven days a week. Even when we exercise or travel to high altitudes our respiratory systems adapt to meet the demands of changing environments.

However, more than 12 million people in the U.S. stop breathing periodically at night due to a serious sleep disorder called Obstructive Sleep Apnea. Even more concerning, the American Academy of Sleep Medicine estimates that 80 to 90 percent of adults with OSA are currently undiagnosed.

Rutgers-based scientist Dr. Judith Neubauer and her team are working tirelessly to solve the mysteries of OSA and develop a treatment for this potentially life-threatening condition.

What is Obstructive Sleep Apnea?

Obstructive Sleep Apnea (OSA) is a serious sleep disorder in which breathing repeatedly stops and starts. These periods can occur up to 100 times a night. Each incidence leads to the brain being episodically hypoxic (lacking oxygen) for years before the disorder is diagnosed.

From babies to adults, OSA affects people of all ages. OSA can be caused by swollen tonsils, smaller airways, tongue or neck size, or medical conditions that cause obstructions. It is still unknown whether the condition is inherited or developed.

Regardless of the cause, this sleep disorder has serious health consequences. Fragmented sleep can lead to daytime sleepiness, slow reflexes, poor concentration, and motor vehicle accidents from “driving drowsy”, and high blood pressure.

Pacemaker Region Could be the Key

Dr. Judith Neubauer and her research team at Rutgers-Robert Wood Johnson Medical School have made tremendous progress in their research, which may lead to a therapeutic treatment for OSA.

Dr. Neubauer focuses on the effect of hypoxia on neurons in various regions of the brain. One such area is the pacemaker region of the respiratory network, the pre-Bötzinger Complex, which is a central oxygen sensor. As its name suggests, this region sets the rhythm of breathing. When the pacemaker senses low oxygen levels, it triggers a breath, creating a breathing pattern.

The pacemaker works in conjunction with an adjacent region of the brain, called the C1 sympathoexcitatory region. When these two regions work together, the muscles involved in breathing have the sustained tension needed to function, due to the impulses from the nervous system that can pass between them. In a state of hypoxia, the collaboration of these two regions allows the body to autoresuscitate so the person can breathe again.

Cell cultures of neurons from these two regions showed that when an oxygen-sensitive neuron is exposed to low oxygen, it increases its firing frequency so neurons can travel more quickly through the nervous system, leading to a faster response in the respiratory muscles. 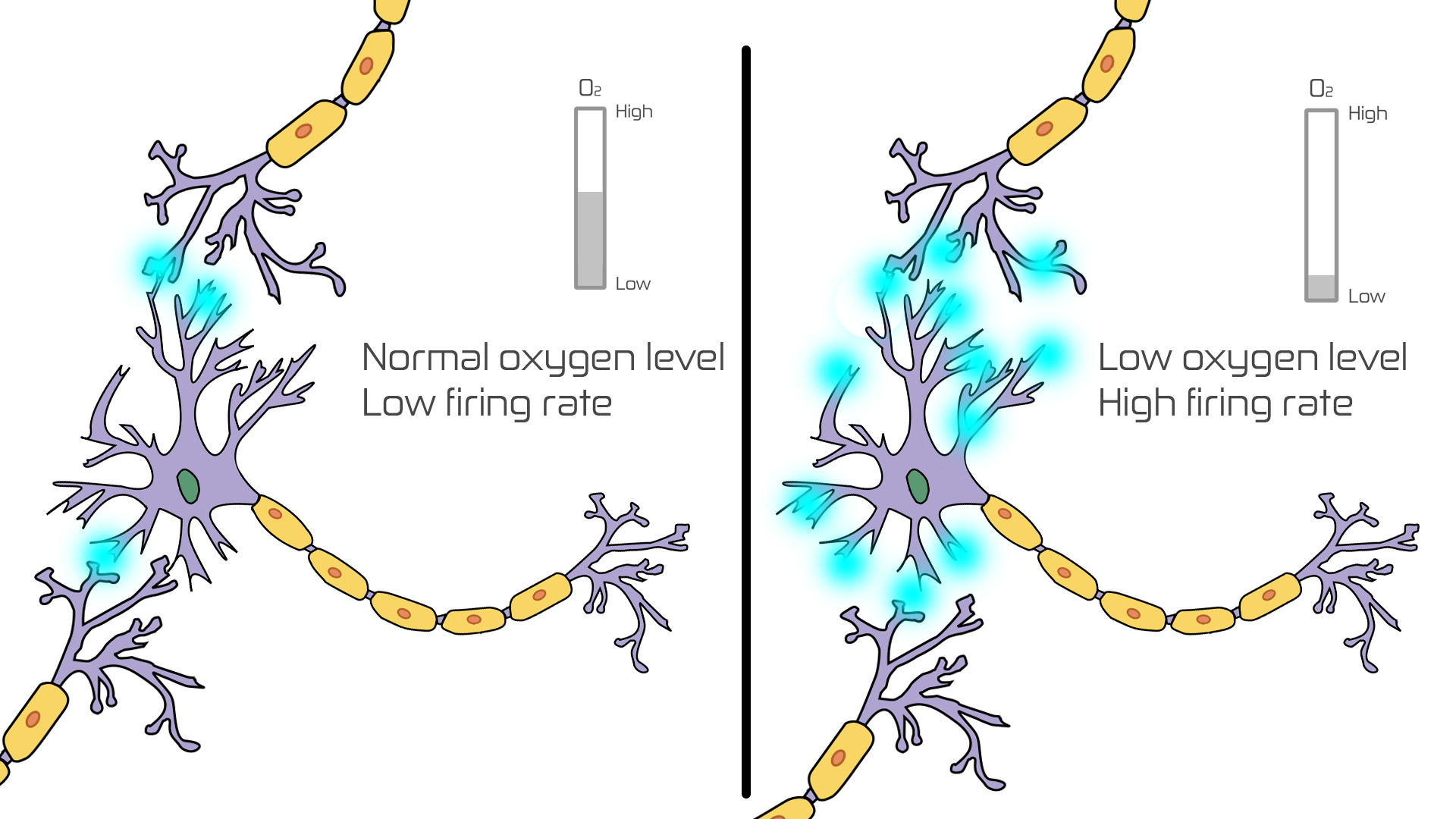 This increase of the neuron’s firing frequency is dependent upon a magical molecule called heme oxygenase. When the scientists blocked heme oxygenase, the oxygen-sensitive neurons no longer responded to low oxygen. This led Dr. Neubauer to conclude that heme oxygenase is essential for neurons to sense low oxygen levels and respond quickly.

Studies using mice have confirmed these findings. Normal mice and mice that lacked heme oxygenase were placed in an environmental chamber that simulated the conditions of OSA, in which they were exposed to periods of low oxygen. The scientists measured how the exposure changed their respiratory responses and found that the mice that lacked heme oxygenase did not have the same responses as the normal mice when exposed to hypoxia.

This research indicates that heme oxygenase may be a potential therapeutic target for the treatment of OSA. The scientists have planned clinical studies in patients with OSA to learn more.

Though it’s hard to get some decent shut-eye with OSA, we can get a good night’s sleep knowing that researchers like Dr. Neubauer and her team are making great strides in finding a new treatment for OSA!

This article was written by Varsha Garla. As always, before leaving a response to this article please view our Rules of Conduct. Thanks! -cSw Editorial Staff

Hello, readers! Thank you for taking the time to read my article! curiousSCIENCEwriters has allowed me to come across the most fascinating research in the rapidly advancing field of biomedical research, so I hope you too were able to learn something interesting. As a student at a STEM vocational high school, I love science, and I hope to pursue a career in medicine. However, the right, imaginative and creative hemisphere of my brain has always challenged its logical and linear counterpart, hence my love of writing. Because I strongly believe that magic is created when disciplines cross, I joined curiousSCIENCEwriters, which has fostered and developed my interests in both science and writing. When I’m not writing, you can catch me reading, dancing, singing, participating in my Student Government, and raising awareness about organ and tissue donation. Thank you again for reading my article!

Just Posted!
Read a full description of the cSw program for 2019/20