Happy Ending to a Grizzly Tale

Amy waits outside a hospital room, her heart pounding and tears flowing down her cheeks. Doctors and nurses hurry by. Don’t they know her heart is breaking? Her father, the person she loves most in the world, lies motionless in a bed where only the beeps of monitors and machines break the silence. Painfully, she recalls dancing with him at the Father-Daughter Dance, cheering uproariously by his side as the Giants score, and belting out Beatles songs in the front seat of his pickup truck. She trembles at the thought of having the man in those vivid memories whisked away in the blink of an eye. Earlier in the day, her father had suffered a violent heart attack. She knew he had heart problems due to high cholesterol, but she hadn’t realized how serious it really was.

While Amy waits to hear about her father, she can’t help but look around the hospital and feel frustrated. All along the walls are posters for races and pasta dinners and walks to raise money for research for all types of conditions and diseases, but nowhere does she see anything about heart disease. Yet, according the Heart Foundation, heart disease causes 680 deaths per day, which is more deaths than AIDS and all forms of cancer combined (Heart Disease: Scope and Impact).

Plaque build can lead to the formation of blood clots which may eventually cause life-threatening heart attacks. [Photo: National Institute of Health]

Coronary heart disease is caused by damage to the inner layers and lining of the coronary arteries, the arteries that lead to the heart. Factors that contribute to this damage include high levels of cholesterol in the bloodstream caused by diet, smoking or genetics. Over time, plaque begins to build up where arteries are damaged. Eventually, the plaque may rupture, causing platelets to come together at the site of the rupture and create a blood clot (National Heart, Lung, and Blood Institute, 2011). Blood clots block coronary arteries and cause life-threatening heart attacks.

Lessons from a Grizzly – Up Close and Personal

While Amy waits for news of her father, her heart races and her mind whirs. She knows she’ll go mad without something to do, so she opens her laptop. She wonders what kind of research is being done for all the people like her Dad, so she types “Heart disease research” into the search box. What she finds takes her breath away. Researchers at Washington State University are studying grizzly bears to learn more about human heart disease.

On average, a grizzly bear hibernates for about six months of the year. During that time, the bear’s heartbeat slows from about eighty-four beats to about nineteen beats per minute, which causes blood to pool in the heart (University of Chicago Press Journals, 2011). If blood pooled like this in a human’s heart, the person would die. Amazingly, the grizzly’s heart alters itself to protect the bear. Finding out how the grizzly bear’s heart makes these changes during hibernation could lead to breakthroughs in the treatment of human heart disease. 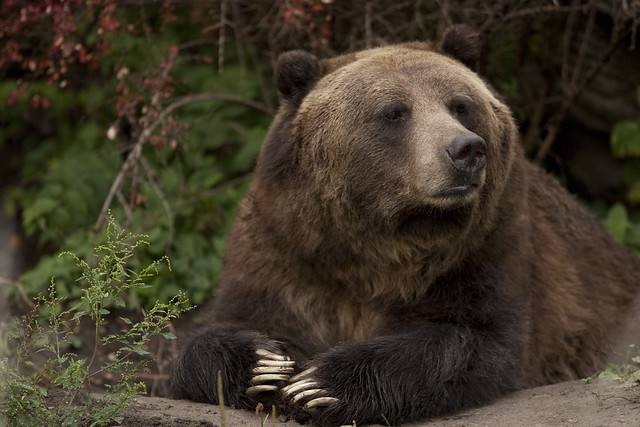 The secret to a cure for heart disease may lie within the heart of Ursus arctos horribilis, the grizzly bear. [Photo: “Grizzly Bear” by Scott Calleja, License: CC BY 2.0]

If blood pools in a grizzly bear’s heart during hibernation, why don’t blood clots form? Research studies reveal that the bear’s heart physically changes shape during hibernation. The left ventricle of stiffens to prevent blood clots from forming and to stop the heart muscles from stretching under the increased pressure of the pooled blood. Without these physical changes, the bear would develop blood clots and eventually suffer from a heart attack or heart failure like many humans with heart disease do (University of Chicago Press Journals, 2011).

According to Bryan Rourke, a professor at Cal State Long Beach, the stiff left ventricle acts like a solid wall. When the atrium, which is the upper chamber of the heart, tries to pump blood down into the ventricle, it meets resistance. Proteins produced during hibernation keep the bear’s atrium from wearing itself out when pushing against the stiff ventricle (University of Chicago Press Journals, 2011).

A Grizzly’s Changes Could Save Lives

The heart of the grizzly bear undergoes dramatic and helpful changes during hibernation to help the bear avoid heart failure.
[Staff Illustrator]

Researchers at Washington State University are studying grizzly bears raised in captivity to figure out how the bears’ hearts undergo such dramatic and helpful changes during hibernation. Understanding how the physical and chemical changes occur that allow grizzly bears to avoid blood clots and ruptured arteries could lead to breakthroughs in long awaited treatment for human heart disease.

The End of One Story Begins Another

Amy holds her breath, waiting for news of her father’s condition. Did he survive the heart attack? Will he be OK? When the doctors and nurses finally finish, she rushes into his hospital room to find her father sitting up, offering her a weak smile. She hurries to him, tears in her eyes, and wraps him in a tight embrace. At that moment, she resolves to do anything and everything she can to raise awareness about the high incidence of heart disease and the need for more research. She also plans to tell the story of the horrible and fearsome bear whose heart may hold the secret to sparing families like hers the devastating loss of a loved one to heart disease.

The left ventricle of a grizzly bear’s heart stiffens during hibernation to prevent the blood clots which would otherwise form due to blood pooling in the heart.
[Photo: A.D.A.M. Education]