Doberman Pinschers Asleep on the Job: Uncovering the Mysteries of Narcolepsy

Home » cYw 2014 » Doberman Pinschers Asleep on the Job: Uncovering the Mysteries of Narcolepsy

Many Doberman Pinschers are used as guard dogs. Unfortunately, it is common for this breed to have narcolepsy, keeping them from their guarding duties. [Unedited Photo: “Doberman Pinscher” by Tina Li, License: CC BY 2.0]

In the dark of night, a policeman and his canine companion, a Doberman Pinscher, were found snoozing on the job. As it turns out they were not slacking off, but were both suffering from a neurological disease called narcolepsy.

When the policeman was diagnosed with this unusual disorder, he began researching to grasp a better understanding of his condition. To his surprise he discovered that this condition among Doberman Pinschers is not rare. Ironically, many of these guard dogs suffer from narcolepsy, which causes them to unexpectedly fall into Rapid Eye Movement (REM) sleep on the job, paralyzing their muscles from head to paws (“Hereditary Problems of The Doberman Pinscher,” n.d.).

The sleepy policeman also discovered that a German watchman named Karl Friedrich Louis Doberman began breeding dogs back in the 19th century for sharp senses, a strong jaw, intelligence, and protective instincts. (“Get to Know the Doberman Pinscher,” n.d.). This night watchman successfully created the ultimate dog for the job, the Doberman Pinscher.

During a visit with his doctor, the policeman claimed he felt so tired, he could collapse. His description fits narcoleptic people and canines alike. This neurological disease is caused by the brain’s inability to regulate sleep-wake cycles. Those with narcolepsy may have abrupt sleep attacks, insomnia, fatigue, hallucinations, sleep paralysis, muscle atonia, and cataplexy. 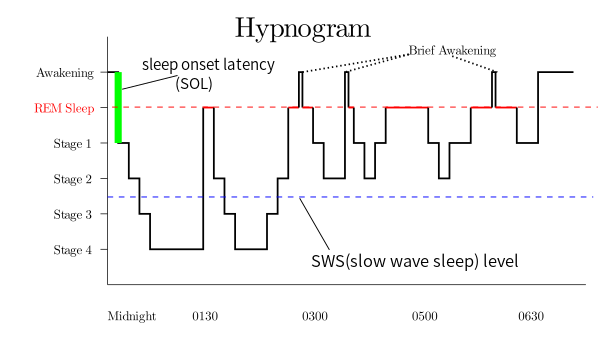 The Hypnogram graph above represents stages of sleep as a function of time. [Unedited Photo: “Sleep Hypnogram” by RazerM, License: CC BY-SA 3.0]

The policeman’s doctor informed him that patients with narcolepsy have abnormal sleeping patterns. When narcoleptics initially fall asleep, they are in a lighter stage of sleep referred to as “non-REM,” and as time passes, they will progress into deeper stages, called “REM sleep”. The average individual will transition from non-REM to REM about 90 minutes after they initially fall asleep. While individuals are asleep, they cycle through the different sleep stages. During REM sleep, the brain and spinal cord circuits prevent the neural excitation of muscles, essentially paralyzing the sleeper (muscle atonia) to keep them from acting out their dreams. In contrast, narcoleptics  enter REM sleep immediately after dozing off and sometimes involuntarily fall into a dream state paralysis during the day (“Narcolepsy and Sleep,” n.d.).  One of the major symptoms of narcolepsy is cataplexy, the complete loss of muscle tone during wakefulness. Cataplexy results from the degeneration of brain and spinal cord circuits. Although extreme sleepiness is usually associated with narcolepsy, those with this disorder do not usually sleep more than normal, they simply cannot control when they sleep (Mayo Clinic Staff, 2012).

Although researchers still do not completely understand the causes of narcolepsy, more information is known about this disease than ever before thanks to the policeman’s pal, the Doberman Pinscher. The first major breakthrough regarding the physiological roots of narcolepsy was made by researchers at Stanford University School of Medicine in California led by French scientist, Dr. Emmanuel Mignot.

A depiction of a hypocretin, or orexin, protein, the receptor that can display a mutation that causes narcolepsy in Doberman Pinschers [Unedited Photo: “1R02 Crystallography”, Public Domain]

Mignot worked with Dr. William Dement, a successful breeder of narcoleptic Doberman Pinschers.  In previous research, Dement had discovered that canine narcolepsy is inherited directly from the parents and is an autosomal recessive trait, meaning both parents must pass down the mutated gene for the offspring to develop the disorder. (“What Causes Narcolepsy?,” n.d.).

The purpose of Mignot’s study was to identify and isolate the gene responsible for canine narcolepsy. In 1999, Mignot found a gene involved in the production of specific receptors located on nerve cells (“What Causes Narcolepsy?,” n.d.). These receptors assist in the transmission of messages that initiate wakefulness in many species. The mutation of this gene interfered with the transmission of these messages, causing narcolepsy in canines (Lang, Faraco, & Li, 1999). The discovery made scientists around the world wonder if a similar genetic link to narcolepsy existed in humans. Although results are still inconclusive, through continued research the scientific community has recognized that there is a hereditary component to narcolepsy in humans. Due to the inconsistency of study results, some scientists speculate that both a genetic predisposition and environmental factors play a role in this disorder. (“What Causes Narcolepsy?,” n.d.). 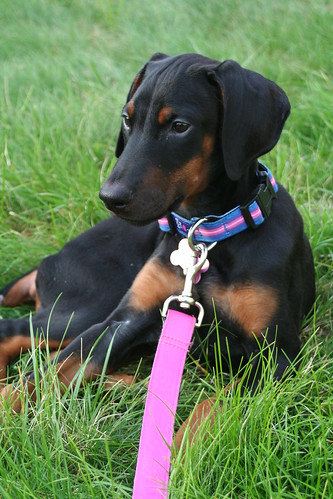 Although narcolepsy still baffles scientists, Doberman Pinschers, like the pup shown above, have helped scientist to learn about the orgin of this neurological disorder. [Unedited Photo: “10 Week Old Doberman Pinscher” by Jenna Gross, License: CC BY 2.0]

The primary methods of treatment for narcoleptic canines and humans are prescription drugs, including methylphenidate and protriptyline. There are several institutions, universities, hospitals, and sleep centers around the world, such as The National Institute of Neurological Disorders and Stroke (NINDS) and the National Institutes of Health (NIH) , which continue to study narcolepsy to further understand the disease and hopefully find a cure. Although there is not yet a cure for the narcoleptic policeman, he owes thanks to his Doberman Pinscher companion for providing an important clue to understanding why they both fell asleep…on and off the job.

This article was written by cYw15. As always, before leaving a response to this article please view our Rules of Conduct. Thanks! -cYw Editorial Staff

Welcome to the cYw website! Whether you have a career in science or are just a curious individual wanting to expand your knowledge, let us entertain you with articles regarding the bio-medical field. As a child, my family moved all over the United States, experiencing many different climates and ecosystems. Everywhere I have lived I have been surrounded by new plants and animals that continue to fascinate me and fuel my love of science. In the future I hope to become either an environmental or bio-medical engineer, while being an author on the side. Besides science, I love tennis, playing the flute, hiking, writing, drawing, and designing things (from architecture to fashion). Do not hesitate to leave comments on our stories; your advice will help us to become better writers!