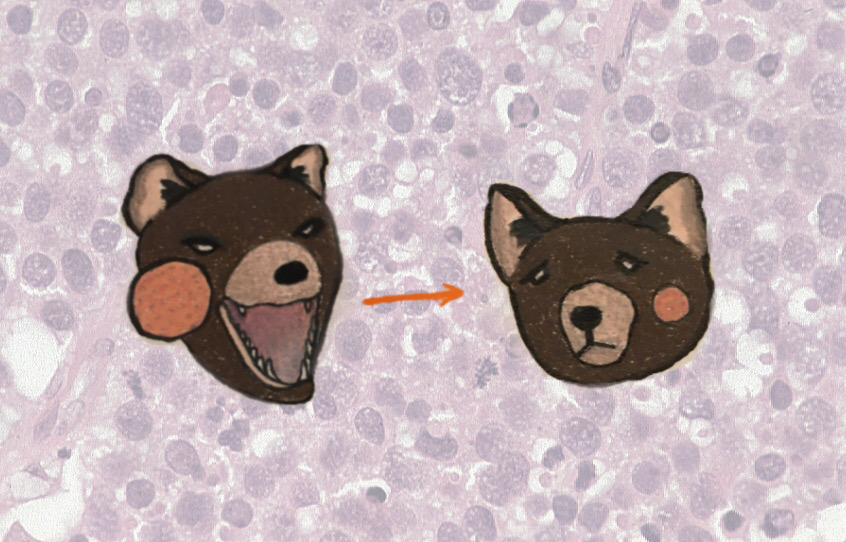 Being a leading cause of death each year, cancer is a word that strikes fear into many of us. All it takes is for a rogue cell to divide uncontrollably and feed off your body until you’re worn out. We sometimes take solace with the assumption that it’s not contagious and can only spread throughout the host’s body. Unlike the coronavirus, it cannot sweep across the globe in a worldwide pandemic — right? Unfortunately, feisty carnivorous dog-sized marsupials, called Tasmanian devils, resoundingly disagree.

Devil Facial Tumor Disease (DFTD) is a disease that has plagued the Tasmanian devil population for over two decades.

As a Ph.D. student under Dr. Paul Hohenlohe at the University of Idaho, Dr. Amanda Stahlke says, “It is a contagious cancer. Unlike a cancer that humans get, this tumor can be spread upon contact so it is similar to a common cold or COVID where the tumor cells themselves can be spread across individuals [through biting]. That is what makes it extremely unique. It attaches to the face of the devils; that’s where the tumors arise. Then it becomes malignant and kills devils usually within a couple of years.”

How are we certain these tumors are not the result of another infection? For example, in humans, Human Papillomavirus (HPV) is known to increase susceptibility to cervical cancer. The answer to this question lies in the fact that the tumor cells are alien-like compared to normal cells.

Tasmanian devils usually have 14 pairs of chromosomes in every body cell. You might expect a slightly mutated cancer cell to have the same number of chromosomes. However, when 11 DFTD cell samples were extracted from different locations in eastern Tasmania, it was discovered the samples only had 13 pairs of chromosomes. What’s more, the tumor cells did not simply lose one pair — they lost five and later gained four pairs of unidentifiable chromosomes. What’s even more astonishing is that all these tumor cells are clonal, originating from the same cancer cell. Various studies also found the tumor cells were infectious with no evidence of any viral activity.

This begs the question, how do these cancer cells evade the immune system? Why can’t Tasmanian devil immune systems detect and destroy these exotic tumors? After all, mammals have evolved a very complex immune system.

The major histocompatibility complex (MHC) refers to a group of genes in mammals that code for proteins on the cell surface. They catch and bind to foreign substances, called antigens. Then, the MHC presents them to T-lymphocytes (T-cells or a type of white blood cell) to determine the appropriate course of action.

There are two types of MHC proteins: class I and class II. MHC I proteins are like security cameras used to monitor buildings. As immune cell police scroll through each CCTV, they can blow up the room if anything is fishy. Similarly, MHC I proteins alert the immune system if the cell is ever hijacked by a virus. T- lymphocytes can then observe this change and trigger the cell to self-destruct. In contrast, MHC II proteins act as binoculars used to scan for burglars outside. They are found on specific immune cells and actively scan for any antigens floating around in the blood.

Taking a closer look at how DFTD cells differ from healthy cells, DFTD mostly affects MHC I proteins by altering them and rendering them nonfunctional. As a result, T-lymphocytes are less likely to bind to DFTD cells and detect the antigens, allowing cancer cells to multiply. Returning to the previous analogy, it essentially changes the settings of the security cameras so it can no longer detect burglars.

Another question we might ask is, why do Tasmanian devils suffer from this out of all species? Contagious tumors do exist in dogs in the form of Canine Transmissible Venereal Tumors (CTVT). However, a clue lies in the evolution of Tasmanian devils. Scientists believe that, long ago, a small group of marsupials were stranded on the island of Tasmania. Over generations, they bred among themselves, evolving into the devils we know and love today. However, because they all descended from such a small isolated island population, they have very limited genetic diversity. As a result, MHC diversity is also limited. The MHC is not able to express as many cell surface proteins (both class I and class II), resulting in less overall sensitivity to foreign substances and cancer cells. For example, when lymphocytes were exchanged between 30 different devils from eastern Tasmania, there was no evidence of any rejection. In contrast, humans sometimes even reject our own tissues and organs.

While scientists are working on a vaccine, there is no direct treatment for DFTD yet. Nevertheless, various studies of DFTD have been fruitful. In very rare cases, devils recovered spontaneously. Researchers were able to link this phenomenon — spontaneous tumor regression — to activation of the RASL11A gene, which plays an important role in the creation of proteins. Interestingly, the silencing of this same gene also occurs in human colon and prostate cancers, meaning further DFTD research could save human lives too.

In the meantime, while we look at DFTD and transmissible cancers both in awe and in fear, our main priority should be to save these adorable creatures. Fortunately, due to our conservation efforts and the natural evolution in their immune responses, Tasmanian devils likely will not go extinct.

“Biodiversity is the spice of life,” Dr. Stahlke explains. “If we don’t pay attention, we’re going to lose the critters that make our world really special.”

Rasika Vartak, Ph.D., is a molecular biologist by training who stumbled into the amazing world of neuroscience five years ago. After completing her Ph.D from UT Health Science Centre, San Antonio, she worked at Stanford University and Arizona State University trying to dissect the pathways that cause neurodegenerative diseases such as Alzheimer’s disease. She has published extensively in both peer reviewed and non-peer reviewed journals.

Michael is a senior from The Peddie School in New Jersey. However, he grew up in California, lived half of his life in China and only returned to the U.S. two years ago. He loves math but science has always had a special place in his heart. In fact, he believes that everyone should have the privilege of understanding its beauty, which is why he applied to this program. In his free time, you can find him watching true crime, binging other random TV shows like Friends, hiking at almost any place and attempting challenging piano pieces.