Acne, the most prevalent skin condition in the United States, affects roughly 645 million people worldwide. Fear of an outbreak has teens reaching for pricey face washes and dabbing grease off of their pizzas in the hope that their faces don’t later resemble the pepperoni pizza they ate for lunch.

Acne, however, is much more than what you eat and what you wash your face with. The cause isn’t completely understood. Genetics, diet, hygiene, and a number of other factors certainly play a role. Some researchers believe that acne may be caused by something out of our control – the battle of many species of bacteria fighting to survive in the face biome. When one species dominates over the rest, the microbiome, or battleground, erupts.

”It is important to identify strain[s] … that might cause imbalances in the resident microbiota. A disturbed balance (dysbiosis) can impact skin health and might initiate or support the events that lead to skin disorders such as acne.” Dr. Gitte J. M. Christensen, a researcher at the Department of Biomedicine, Aarhus University, Aarhus, Denmark, emphasized.

In their quest to defeat acne, researchers have suggested that P. acnes may be to blame. P. acnes is a bacterium that forms part of the normal flora, or ecosystem, of the skin, oral cavity, and the large intestine. P. acnes is typically harmless, but it can cause infections when the immune system is weakened or the microbiota is disrupted. P. acnes may play a role in the intensification of the inflammatory process, Dr. Christensen added. 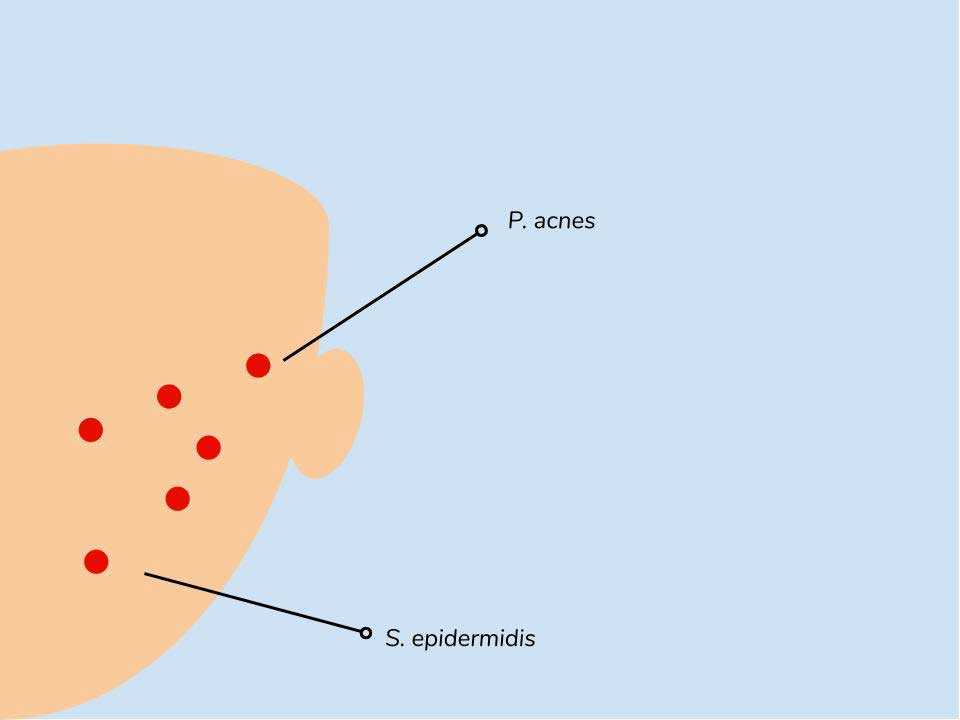 Researchers have observed an overgrowth of P. acnes is correlated with an overgrowth of the bacterial species S. epidermidis. There is continuing debate whether the increase in S. epidermidis encourages P. acnes growth or acts as a defense mechanism against it. The two bacterial species may be a match made in heaven with the shared goal of wreaking havoc on skin, or they may be mortal enemies with the purpose of defeating each other.

Dr. Christensen found that P. acnes associated with healthy skin displayed “increased antimicrobial activity against S. epidermidis,” which could be attributed to the production of the thiopeptide, an antibiotic that prevents bacteria like S. epidermidis and P. acnes from making proteins that aid in communication between bacteria. This research contributes to the ambiguous relationship between S. epidermidis and P. acnes, adding one piece of the puzzle to the complex nature of the shifting dynamics of the microbiome on our face.

For now, acne remains a skin condition that tends to be “managed,” but not completely cured. According to Dr. Christensen, “Once we do understand the intricate relationship between members of our skin microbiota, I do believe we will see a much more targeted approach to the treatment of acne than the broad spectrum antibiotic treatment used nowadays.”

Dr. Gitte J. M. Christensen is currently a research scientist and product developer at DermaPharm A/S located in Faarup, Denmark. She received her Masters degree in science in 2011 and her PhD in 2015 at Aarhus University in Aarhus, Denmark. She has published several microbiology and dermatology papers, with her most recent one being published by The Danish Environmental Protection Agency, called Less preservatives in cosmetics – MiKoKo.

This article was written by Erica Choe. As always, before leaving a response to this article please view our Rules of Conduct. Thanks! -cSw Editorial Staff