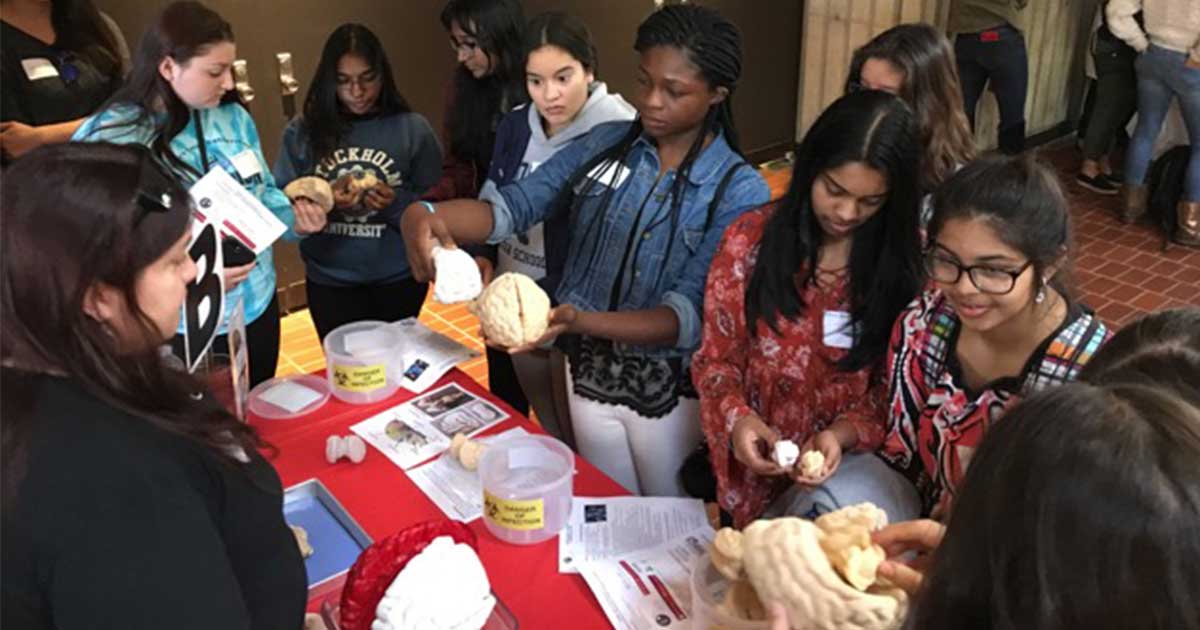 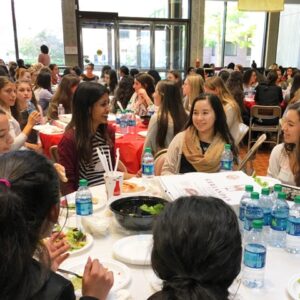 Rutgers University recently hosted the largest Young Women in Bio (YWIB) event ever held in the US and Canada. Orchestrated magnificently by Dr. Janet Alder, this first YWIB event in New Jersey exposed 270 female students from 18 high schools throughout the state to a wide range of careers in science and medicine. The following report by Akansha Khurana and Akila Saravanan, Curious Science Writers student staffers, is based on their interviews of the six motivational panelists featured at the landmark event called “Curious About Careers in Biomedical STEM.”

Women make up half the world’s population, yet the number of women with careers in science is not commensurate. Stereotypes and gender biases are among historic and ongoing factors in this imbalance. Despite significant strides, women playing important roles in science continue to face challenges even today; however, there is an upward trend as more women are graduating with undergraduate and graduate degrees in science. This progress is, at least in part, a result of the paths charted by pioneering women in the field and inspirational programs like those offered by Young Women in Bio.

A recent event called “Curious About Careers in Biomedical STEM” organized under the aegis of Young Women in Bio in New Jersey brought nearly 300 high school girls together on the campus of Robert Wood Johnson Medical School for a day-long introduction to careers in the biological sciences. Co-sponsored by several scientific organizations, the conference featured a panel of fascinating role models (all women, of course!), as well as hands-on learning exhibits covering various topics in bioscience.

Each panelist shared her personal journey, detailing factors that influenced her to pursue a science career and as well as obstacles that had to be overcome. By the end of the day, the program evoked a sense of pride and unity among the young women who had gathered and opened their eyes to a variety of avenues and opportunities in the field of biological science.

Facing Roadblocks
Ina Nikolaeva, PhD, desribed her parents’ reaction to her decision to pursue science in college. “For a woman, really?” Faced with financial troubles, her family first eliminated her college tuition. Nonetheless, Dr. Nikolaeva pursued her dreams with the support of a family friend. Her experience illustrates what other women have faced in the past, and what some women still face. Those who were fortunate and persevered despite severe obstacles have made significant strides in the scientific community. The disparity between men and women in the sciences can be seen in the fact that “just 18 women are Nobel laureates while 581 men have the same prize.” Estela Jacinto, PhD, another panelist, emphasized that “we [women] have a lot of catching up to do.”

Keeping an Open Mind
Even after overcoming initial obstacles, success is not a given — one has to be creative, vigilant, and assertive. Dr. Jacinto recalled the importance of “seizing every opportunity.” As an average student, she felt medical school was not an option for her. She explored various avenues in sciences. Ultimately, her work as a greenhouse technician gave her the first opportunity in research. After that there was no looking back. She eventually worked her way up to become a principal investigator and assistant professor at the Robert Wood Johnson School of Medicine.

Inspirations and Triggers
For several panelists, inspiration to pursue a career in investigative medical research was spurred by unfortunate circumstances. Karen Akinsanya, PhD, was deeply affected by her father’s illness. She wanted to make a change in the world and went into research. Currently, she is a “drug hunter” who searches for novel software- and technology-based therapies to fight disease. Dr. Jacinto gravitated towards medical research when her daughter developed leukemia. Some women are inspired to pursue science at an early age. Take for example, Deborah McCloskey, RN, who knew she wanted to make a career in medicine from the age of 17. She currently conducts clinical trials in the field of rare and orphan diseases at a major NJ hospital.

Work-Life Balance and Reflections
The panelists left the enthusiastic audience with some practical takeaways. Dr. Akinsanya advocated that students “start networking” early. She also noted that her career would not have been possible without a good family support system and that “[her] husband is [her] biggest fan.” Tanaya Bhowmick, MD, recommended that students consider taking a “gap year to do research with companies and universities.” Addressing a common concern amongst the attendees, Dr. Jacinto emphasized that “it is important to be truly motivated about your job but still balance work, family and hobbies.” Valerie Fitzhugh, MD, said “I still take my kids apple picking.” Although she agreed that a job in the medical sector could be stressful at times, she noted that “a career in medicine can be rewarding and fruitful if one focuses on the good moments because the good moments outweigh the bad.”

The message from the panelists was clear. Be motivated, pursue your dreams and be flexible. Opportunities for women in STEM fields are growing. The inspiring stories of the panelists left us with the confidence that there are many new pathways for women to chart in the field of biomedical STEM.