Imagine yourself strolling through a beautiful park. Surrounded by nature, you smell the fresh air and let the sun hit your face. Suddenly, you hear a familiar buzzing and immediately turn pale. You see a venomous wasp and are tempted to run away. Research may soon cause you to reconsider how you look at wasps: their venom is being explored as a treatment for breast cancer.

In lab studies, scientists discovered that when cells and wasp venom interact, the venom interrupts the cell’s energy-producing process and creates gaping holes in the cell membrane. Everything inside the cell oozes out, and the cell eventually dies.

Scientists can use the poison in wasp venom to kill cancer cells. They know, however, that using pure wasp venom presents two problems: the venom immediately degrades when it touches the body’s blood, and it will also kill off any healthy, normal cells in the body. 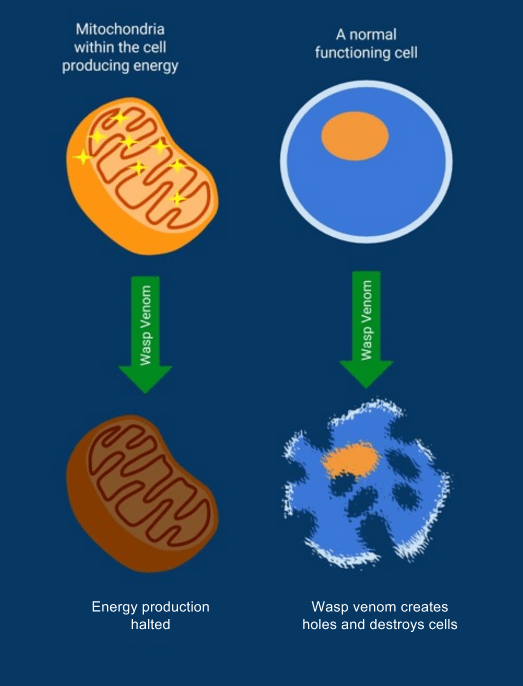 In the process of designing a way to use wasp venom to treat breast cancer, Spanish scientists at the Institute for Research in Biomedicine in Barcelona have solved these problems. These scientists learned that a peptide called Mitoparan in wasp venom is the culprit that kills cells. According to Miguel Moreno, “This peptide has the ability to form pores in the cell plasma membrane, penetrate into the cell and finally, cause its death.”  To ensure that Mitoparan reaches the cancer cells, the scientists attached other molecules to the venom to preserve it as it travels through the body. Among these molecules is a protein that specifically targets breast cancer cells. This protein allows the cell-killing venom with Mitoparan to attach only to breast cancer cells, leaving healthy cells alone.

Other teams of researchers are also investigating how wasp venom can be used to treat cancer. For example, Paul Beales from the University of Leeds notes “cancer therapies that attack the lipid composition of the cell membrane would be an entirely new class of anticancer drugs. This could be useful in developing new combination therapies, where multiple drugs are used simultaneously to treat a cancer by attacking different parts of the cancer cells at the same time.” The research from these and other scientists show the exciting possibilities of wasp venom as a cancer treatment.

Who would have guessed that something as angry and dangerous as a wasp could help us fight breast cancer? So next time you take a stroll through the park, pay careful attention; you might be looking at another one of Mother Nature’s powerful medicines just waiting to be discovered.

This article was written by Faizah Chowdhury. As always, before leaving a response to this article please view our Rules of Conduct. Thanks! -cSw Editorial Staff