Could Broccoli Be The Key to Unlocking Aging?

Home » Bioscience » Could Broccoli Be The Key to Unlocking Aging?

The garbage disposal has revolutionized post-dinner cleanup. Simply collect the dinner plates, scrape off the leftovers and, with the flip of a switch, watch as the blade grinds and sucks away the food, leaving the sink debris free. Now imagine if that garbage disposal broke down and left scraps of food mixed with watery sludge, building up debris and ultimately damaging the sink.

With this analogy, we can begin to understand what new research suggests might happen in the rare genetic condition, Hutchinson-Gilford Progeria Syndrome (HGPS). Simply put, HGPS patients have a faulty cellular garbage disposal that causes the buildup of a toxic substance in their cells, leading to early aging. 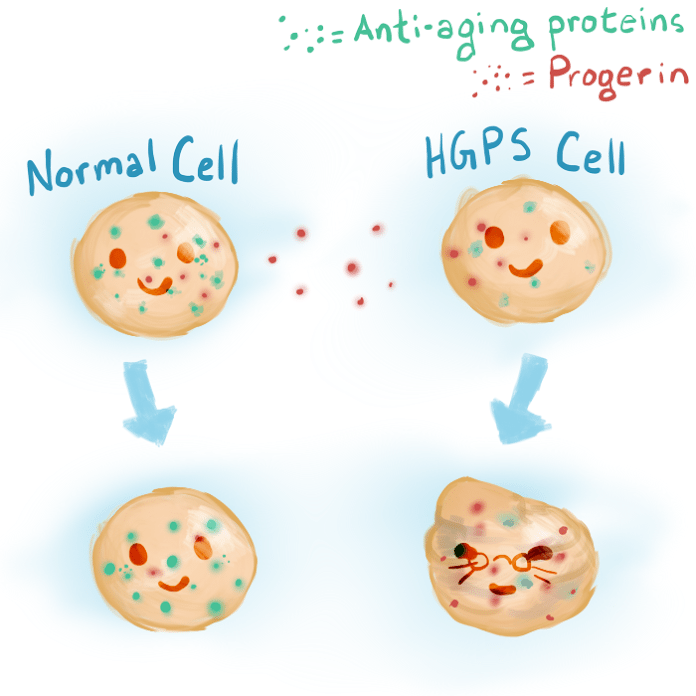 A build up of progerin can lead to early aging.

HGPS affects 1 in every 20 million people worldwide and often results in early death at the age of 13. Children with HGPS have a characteristic “old person” appearance and suffer a loss of body fat and hair, stiff joints, and growth problems. As a result of premature aging, the most common cause of death in HGPS patients is heart disease, with patients experiencing high blood pressure, stroke, and heart failure.

In hopes of combatting HGPS and learning more about aging, Dr. Karima Djabali, a top progeria researcher at Technical University of Munich (TUM), has recently found a compound in broccoli called sulforaphane that can help fix the damaged cellular aging process in HGPS patients. In other words, this substance can repair a broken garbage disposal.

Dr. Djabali’s research shows that there are several proteins associated with cellular aging that are suppressed in HGPS patients. This allows the buildup of toxic sink sludge: a defective protein called progerin. While everyone accumulates progerin with age, our cellular machinery normally breaks it down. That degradation process becomes less effective as we age, and is further impaired in HGPS patients. But, when exposed to sulforaphane, the proper aging proteins are more highly expressed and degradation processes needed to rid the cells of progerin are improved, with preliminary work showing a 30% reduction of progerin in HGPS affected cells.

In the future, Dr. Djabali hopes to test sulforaphane on a mouse model of HGPS and eventually conduct clinical trials. However, there are a few obstacles. Though sulforaphane is found in broccoli, one would need to eat over 100 grams of raw broccoli a day to reap its aging benefits. Sulforaphane is also unstable, only lasting a few minutes. As a result, Dr. Djabali is also working on identifying a more stable compound with similar potential.

A passionate researcher, Dr. Djabali recognizes how devastating this disease is to progeria patients and their families. One such patient, Sam Berns, told his story through the documentary, Life According to Sam. Sam was a typical teenager who loved playing the drums, going to rock concerts, and hanging out with friends. However, there was one thing that made him different: HGPS. Sadly, Sam Berns died of complications of the disease at the age of 17.

While HGPS is truly a terrible disease, there may be a silver lining. It may be able to offer insights into the aging process. In fact, the key to unlocking aging through HGPS may have just been found in broccoli, a vegetable found in every supermarket, on every dinner table, and scraped into countless garbage disposals.

This article was written by Bret Silverstein. As always, before leaving a response to this article please view our Rules of Conduct. Thanks! -cSw Editorial Staff

Hello and welcome to cSw! It’s hard to believe that I am entering my senior year of high school and this will be my last year as part of cSw. As a student in a STEM high school with a focus on the medical sciences, cSw has enabled me to combine my passions for science and writing, and get others interested as well by enjoying some amazing stories. When I am not working on a cSw story, I like to keep very busy. I am an avid reader, a New Jersey Governor’s STEM scholar, President of my school’s Students of Service Club, and officer of the National Honor Society. I look forward to receiving feedback on my articles!