John and Amy, now divorced, were devastated by the unexpected loss of their infant son, Jimmy. At three months of age, Jimmy died suddenly in his sleep. Even after an autopsy was performed, they still did not know why he died. Jimmy was just one of the 2,000 newborn babies who succumb every year to Sudden Infant Death Syndrome (SIDS).

SIDS is the leading cause of post-natal death in the United States. Sadly, this deadly syndrome not only takes new life but leaves shattered families in its wake. Because their baby’s death is sudden and without explanation, grieving parents often blame themselves. Such pervasive guilt can lead to depression and destroy marriages.

Yet, there is some good news. Research scientists like Dr. Judith Neubauer at Rutgers-Robert Wood Johnson Medical School in New Jersey are trying to understand SIDS in order to help new parents avoid this tragedy.

What is SIDS?
According to the Mayo Clinic, SIDS is the unexplained death, usually during sleep, of a seemingly healthy baby less than a year old. Diagnosed by a process of elimination, often after an autopsy, SIDS shows no apparent pattern between victims.

Not technically a disease, it cannot be cured. However, guidelines have been developed that are proving effective in reducing the incidence of SIDS. Consequently, guidelines are available to inform parents of at-risk infants, reducing the number of SIDS victims every year. Preemptive measures include putting the baby on his/her back to sleep, not sleeping with the baby in the same bed, and not smoking during pregnancy. 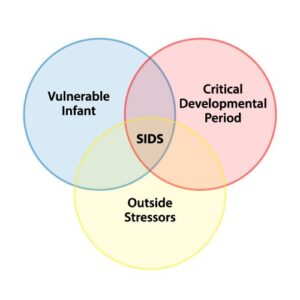 Promising Research
Researchers are studying a variety of factors to solve the mystery of SIDS. These include everything from brain abnormalities and respiratory infection to which side the baby should sleep on.

Dr. Neubauer has dedicated the better part of her professional life to researching the neurobiology of respiratory control, particularly as it relates to SIDS. Her team has focused on the ability of the rat nervous system to regulate hypoxia, or the lack of oxygen in body tissues, which is one possible cause of SIDS.

Following a different path, UCLA researchers found that SIDS babies had difficulty breathing during sleep as early as their first week of life. They hypothesized that the inability to control breathing is due to an apparent fetal defect.

Outlook
Scientists like Dr. Neubauer are working tirelessly to prevent SIDS by identifying risk factors and causes. They are committed to a future without SIDS, a future where thousands of parents are no longer traumatized by sudden loss of their babies.

This article was written by Tyler Meli. As always, before leaving a response to this article please view our Rules of Conduct. Thanks! -cYw Editorial Staff

Hello users of the interweb and welcome to the curiousSCIENCEwriters website! I am currently a senior in high school and this is my second year of writing for cSw. My passion for the STEM fields is unmatched and I aspire to pursue business and law as majors in college and possible careers further into the future. Writing for cSw has been a one-of-a-kind experience; I hope to be in similar programs throughout my years at college. I encourage you to leave a comment down below and share your thoughts or questions regarding the article.