Finding Hope in the Dark: Appaloosas Shining a Light on Human Night Blindness

Listen to the audio file of the story:


It was a typical day in the state of Washington: both rain and sunshine fell upon the land. Dark clouds spread across the area once called Palouse by the Native Americans (“History of the Appaloosa,” 2011). Near the Palouse River a married couple lived on a small horse ranch with their seven-year-old daughter, Louisa. The girl’s favorite type of horse was the Appaloosa, a breed indigenous to the Palouse region and known for its spotted coat (“Guide to Identifying an Appaloosa,” n.d.). To Louisa’s delight, her parents owned one Appaloosa, which she named “Spot” for his beautifully spotted coat. Little did she know that his spots were the key to unlocking the mysteries of a disease that affects both Appaloosas and humans. 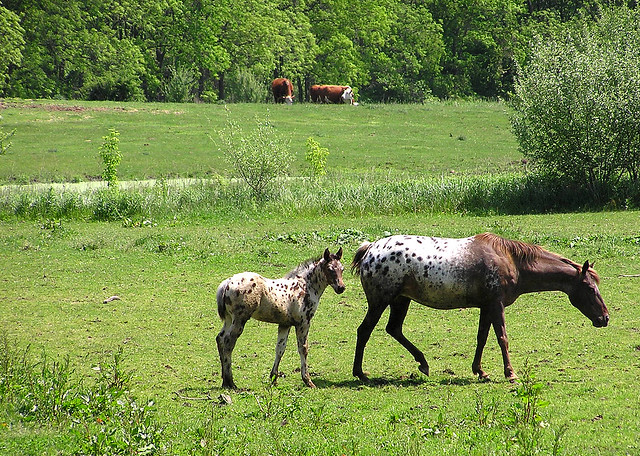 That evening, Louisa decided to sneak out to take Spot for a stroll. For as long as she could remember, her parents had forbid her to go outside after dark because Louisa had trouble seeing in dim light. When she was very young, her parents had noticed she had a vision problem; in low light her eyes did not focus on objects in front of her. Louisa was diagnosed with night blindness, but being only seven, she had trouble understanding this complex disorder.

As Louisa headed towards Spot’s horse stall, she recollected the fuzzy memories of the day when she learned she had night blindness. She had sat on the examination table, grasping only bits and pieces of what the doctor was saying.

“I believe Louisa has CSNB, or congenital stationary night blindness, a disease that impairs night vision. The inability to see in dim light, or ‘night blindness’ can be caused by cataracts, vitamin A deficiency, and diabetic retinopathy, among other things (“Vision – Night Blindness: MedlinePlus Medical Encyclopedia,” 2012). However, any disease causing night blindness that is present at birth and non-progressive is classified as CSNB. There are several forms of CSNB in humans and other animals that vary in severity of vision impairment, but all involve some lack of rod function (Archer, 2007).

“The human eye contains a layer of tissue known as the retina, which acts like an electronic image sensor of a digital camera, converting optical images into electrical signals. These electrical signals are then transmitted to the brain, allowing the individual to see an image. The retina layer is composed of photoreceptors called rods and cones, which are the first cells to respond to light and begin the transmission of messages to the brain. Cones are responsible for high light levels, while rods are responsible for low light levels or dim light (Chudler, 2013). The direct cause of CSNB is not known, but scientists believe it has to do with a physiological abnormality of the rods, which causes an unsuccessful transmission of electrical signals to the brain.”

That night, Louisa decided to ignore her parents’ rules and explore the surrounding woods with Spot. She was unaware that ominous and dark clouds were on the horizon. Deep into the forest, the girl and horse walked until they came across a figure concealed by shadows. To Louisa’s astonishment, she realized that the figure was a stray horse. Although the horse’s coat was without any spots, Louisa was certain this horse was also an Appaloosa. The horse seemed scared, so she began comforting it with soft strokes when all of the sudden it began to rain. She looked up to see dark clouds coming her way, and slowly, but surely, she began to lose her vision. Thunder crashed in the distance, causing the stray horse to shriek in fear, but instead of running off, the horse stayed by Louisa’s side, as if it could not see in the dark either.

As the sky continued to darken, Louisa worried she would never make it home. To her relief, Spot took control of the situation. He nudged her face with his snout, signaling her to follow him. Louisa held onto both horses’ manes as Spot led them through the darkness to the safety of her home. When they reached the ranch, Louisa’s parents rushed to embrace her. Her parents said they were about to go search the woods, but were interrupted when a woman came to the door looking for a lost horse. They introduced the woman to Louisa and at the sight of the stray Appaloosa, the woman began to laugh.

When the woman had first arrived at the ranch, Louisa’s parents had told her about Louisa’s disease and explained why they were anxious to find her. Coincidentally, the woman was a scientist familiar with CSNB, and wanted to share her knowledge of the disease with Louisa in hopes it would help Louisa understand her predicament. The scientist told Louisa,

“Over the past few years, my colleagues and I have discovered that there is a connection between Appaloosa coat patterns and night blindness. Appaloosas without any spots, like my horse, typically have CSNB, while those with spots are not usually affected. That is why your horse, Spot, can see in the dark and was able to guide you home. All animals, horses and humans alike, have something called genes, which allow traits and characteristics to be passed down to us from our parents. The trait responsible for Appaloosas’ spots is called LP, or Leopard Complex Spotting. A mutation in a gene affecting this trait causes a protein called TRPM1 to function improperly, preventing rods in the eye from successfully sending electrical messages to the brain. Therefore Horses that have mutated LP genes oftentimes have CSNB (Bellone, 2013).”

Louisa was still a little confused.

“How does all of this relate to me not being able to see in the dark?”

The scientist smiled and said, “Well, once human researches became aware of our findings regarding TRPM1 and CSNB, they started studying TRPM1 in humans, too. These scientists found that people who have night blindness also have proteins that do not function properly, and fail to send electrical images from the rods to the brain. This connection between night blindness in horses and humans gives us the opportunity to further investigate the cause of CSNB and how we can treat it in both humans and animals (Bellone, 2013)”

“So one day there might be a way for both your horse and me to see in the dark?”

That night Louisa snuggled safe in her bed as the thunder continued to rumble. She could not see in the dark, but for once in her life she realized she was not alone.

This article was written by cYw15. As always, before leaving a response to this article please view our Rules of Conduct. Thanks! -cYw Editorial Staff

Welcome to the cYw website! Whether you have a career in science or are just a curious individual wanting to expand your knowledge, let us entertain you with articles regarding the bio-medical field. As a child, my family moved all over the United States, experiencing many different climates and ecosystems. Everywhere I have lived I have been surrounded by new plants and animals that continue to fascinate me and fuel my love of science. In the future I hope to become either an environmental or bio-medical engineer, while being an author on the side. Besides science, I love tennis, playing the flute, hiking, writing, drawing, and designing things (from architecture to fashion). Do not hesitate to leave comments on our stories; your advice will help us to become better writers!