The Naked Truth: The Naked Mole Rat and the Elusive Cure for Cancer

Home » Cancer » The Naked Truth: The Naked Mole Rat and the Elusive Cure for Cancer

The naked mole rat, though not a beauty pageant star, won Science magazine’s 2013 Vertebrate of the Year for its role in cancer research.
[Graphic by Staff Illustrator]

On a beautiful day in July, Susan went for a routine mammogram. A former beauty queen, she spent more time on her hair and makeup that morning than she did considering the screening ahead. Her mammogram revealed very early-stage breast cancer. With a family history of cancer, she opted for a bilateral mastectomy, surgery to remove not only the diseased breast, but the healthy breast as well. “I just couldn’t live with fear,” Susan explained. “I don’t want to sound vain, but I didn’t want chemotherapy – I was upset about losing my hair.”

How ironic that the naked mole rat, a hairless, nontraditional beauty and Science magazine’s 2013 Vertebrate of the Year, might hold the key to understanding and conquering cancer.

The Cancer Epidemic
Cancer is a condition in which abnormal or damaged cells divide in an uncontrolled fashion, potentially invading local tissues or spreading elsewhere in the body through the blood and lymphatic systems. There are more than 100 different types of cancer, often categorized by the organ or cell type in which they start (“What is cancer?” 2014).

According to the American Cancer Society, in 2012, close to 14 million Americans had a history of cancer. It was predicted that in 2014, over 1.6 million new cancer cases would be diagnosed, not including many of the noninvasive cancers, like Susan’s, and over 500,000 people would die of cancer (“Cancer facts & figures,” 2014).

Damaged cells within the body are usually destroyed in a process called apoptosis, but cancer cells are damaged cells that divide out of control, invading the surrounding tissues.
[Graphic by Staff Illustrator]

The Naked Mole Rat
An odd looking creature with prominent walrus-like teeth and a hairless wrinkled body, the naked mole rat begs the expression, “beauty is in the eye of the beholder.” Yet there is perhaps no animal more important to the study of cancer, leading many scientists to consider this uncomely creature in a whole new light.

The naked mole rat, or Heterocephalus glaber, has a very long life span, with some living as long as 32 years, but what makes it unique is its apparent resistance to developing cancer. By comparison, lab mice live around 4 years and often succumb to cancer (Callaway, 2013).

In 2009, Andrei Seluanov and his team at the University of Rochester first described a process of tumor blockade called early contact inhibition that is present in the naked mole rat but not in any other mammalian species. This process might be part of this rat’s unique tumor busting superpower, effectively protecting it from the rapid cell growth and division that occurs with cancer (Seluanov, 2009). 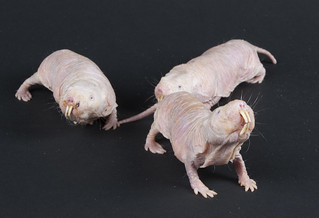 Seluanov thinks the answer to “why?” may be sugar, the same molecule that gives the naked mole rat its wrinkled skin. It seems that the mole rat’s fibroblasts, cells found in connective tissue, contain lots of sugar. The sugar, called hyaluronic acid, is produced in long chains that wind around the cell and coat it, leaving tumor cells unable to grow. The next step in Seluanov’s research is to see if these long chain hyaluronic acids, when inserted into mice, also have a protective mechanism (Callaway, 2013).

The mole rat also has an extremely accurate process of building proteins with very few errors, which likely contributes to their longevity (Poppick, 2013). This process may be another cancer protective mechanism, and might explain why naked mole rats are able to live longer, healthier lives compared to other mammals.

Mirror, mirror…
By earning Science magazine’s coveted award, the naked mole rat has gained repute for more than its looks. This curious little mammal clearly possesses admirable qualities that are more than skin deep. As Susan, who is now cancer free, says, “I’m not fond of rodents, but I may feel differently if they help researchers conquer cancer. I only hope to see that in my lifetime.”

This article was written by cYw27. As always, before leaving a response to this article please view our Rules of Conduct. Thanks! -cYw Editorial Staff

Hello and welcome to cYw! I am so excited to be a member of the writing team. As a student in a STEM high school with a focus on the medical sciences, cYw enables me to combine my passions for science and writing, and hopefully get others interested in the amazing ways animal models can teach us about human disease. When I am not working on a cYw research story, I like to keep very busy. I am an avid reader (I especially love the dystopian/science fiction genre), as well a tennis player. I’m also an active member of my school’s Model UN club. I love helping others through volunteering, both in my school and in my community. I look forward to receiving feedback on my articles!